Ducati's Jack Miller says he is "really pissed off" with himself after a "shit nothing crash" took him out of the MotoGP Dutch Grand Prix podium battle.

The Australian was running eighth in a tight group battling for the final two podium slots when he crashed on lap 15 of 26 at the Strubben hairpin.

Miller says he was braking harder at that point in anticipation of Suzuki's Joan Mir and LCR Honda's Takaaki Nakagami coming to blows and tucked the front as a result.

He re-joined the race but was forced to retire on lap 18 when he was shown the black and orange flag for a technical issue.

"I felt good, I was in my rhythm," said Miller, who is now 56 points off the championship lead.

"I could see me and Miguel [Oliveira] were staying sort of central but the front group… well, Pecco [Bagnaia] and those guys were coming back towards us.

"And then Mir was doing one of his passes at Turn 5, making contact with Taka.

"So, I braked earlier if there was contact, if somebody fell off I knew I could pick my way through.

"And just as I released the brake a little more early… I braked harder, I had the same speed, was trailbraking to the apex there with some load on the front tyre and obviously I didn't have enough load on the tyre and fell over.

"I guess I was just watching that [what was happening in front] and my mind was focused on what to do, trying to read the situation in front of me rather than focusing on what I was doing 100% and that was enough." 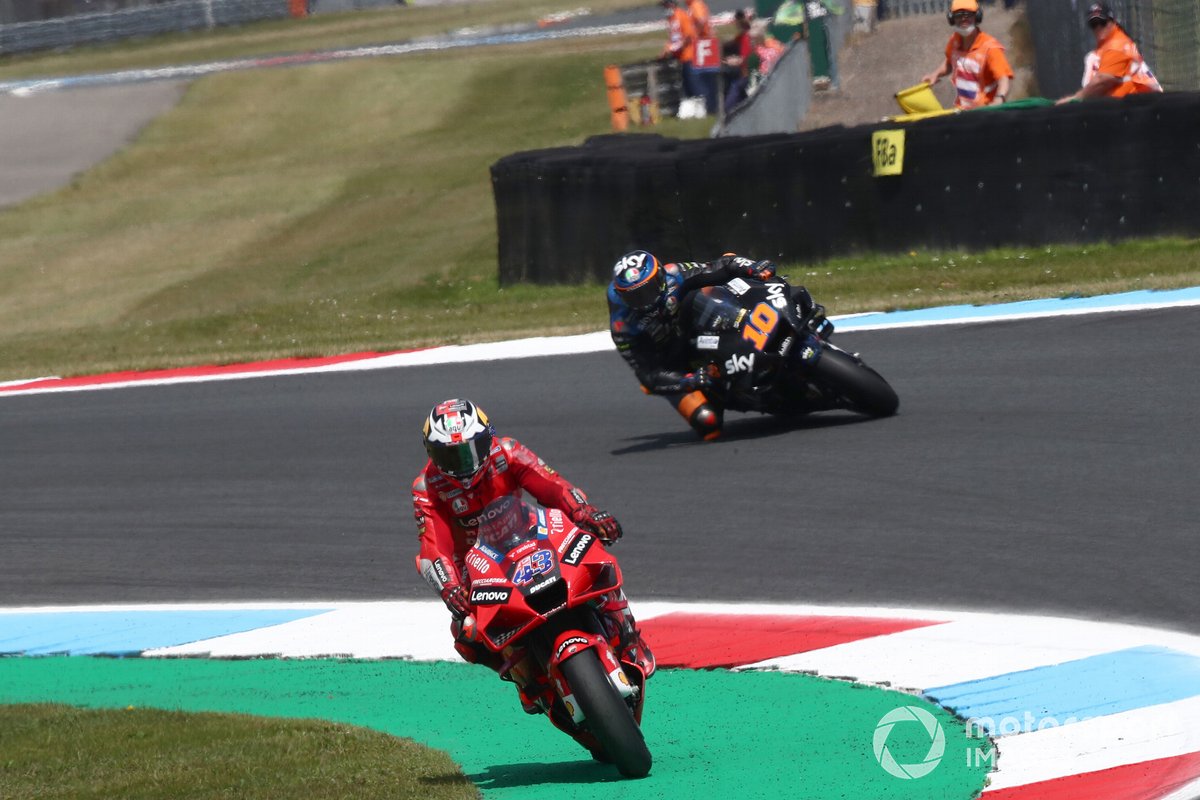 Miller said Race Direction had no reason to show him the technical flag as the smoke it saw coming from his bike was simply oil overflow being burned off after his Ducati had been on its side.

"Like I said it was a nothing first-gear crash, my handlebars weren't even bent," he added.

"I picked the bike up and got going again, but they said… we have a system that basically if the bike's on its side you've got an overflow from when the bike's over, there's more oil pumping around a certain part of the engine.

"So, there's an overflow and then when that fills up it will dump a little bit into the exhaust to burn it off basically.

"And they said they saw smoke coming out of the back, so they meatball flagged [me].

"But they didn't really have a reason, so they just had to call us in there to cover their arse a little bit.

"Was nothing, I did what I could, I knew the bike was find because I was riding around like nothing had happened.

"But as soon as you see that you check to see if there's any oil pissing out of it, but there wasn't."

Mir: Current Suzuki "not enough" to fight for MotoGP title

Aleix Espargaro "feels like an idiot" after Assen MotoGP race