Jack Miller was critical of riders “suicide-moving” on the inside of Sepang’s final corner in the MotoGP Malaysian Grand Prix, after receiving a heavy hit from Alex Rins.

Rins clattered into the side of Miller at the Turn 15 hairpin while trying to take fifth away from the Pramac Ducati, with the Suzuki rider losing the winglet on the right side of his bike.

He went onto just miss out on a podium in fifth spot, while Miller faded to eighth in the end as he battled a loss of grip with his soft front tyre.

Commenting on the collision, Miller says his arm was “completely black” from Rins’s move and reckons the GSX-RR’s agility makes it “inviting to make moves” like that.

“A lot of guys were just suicide-moving it up the inside on the white line,” said Miller. “It was quite a strange race, I really felt like we had the pace for the podium fight.

"I got a big smash [from Rins]. My arm was completely black, my shoulder took a big smash. But I don’t think it affected the bike too much.

“It’s not the first time [this has happened], it won’t be the last time. I mean, it’s racing, we have to touch. The Suzuki turns well, so I guess it’s inviting to make moves like this.

"But it’s difficult for us on the Ducati, especially with a corner like this with the camber. You need to sort of square it up. But as soon as you do that, it leaves that little bit of space.”

Miller also admits he was “very lucky” to stay in the race, as he heard Suzuki’s Joan Mir coming up the inside of him late on in the move that took out LCR Honda’s Johann Zarco.

“I was prepared for most of them, even with Mir,” he added. “I think it was the same moment he took out Zarco. I was very lucky. Going into [Turn] 14 I was on my normal line and I heard a bike downshifting, so I knew a bike was coming.

“I stood it up just a little bit to be sure. I tried to ride a smart race and stay out of trouble.”

Mir was handed a long-lap penalty for his collision with Zarco, although he labelled it “unfair”, highlighting that the LCR rider took partial blame for the incident.

Rins escaped the Miller collision without penalty, and believes he did nothing to warrant punishment.

“For sure no,” he replied when asked if he did anything wrong with Miller. “If I did something wrong, the stewards would’ve given me a long-lap penalty or something like this.

“I think this is racing. He opened the door and I tried to enter. This is MotoGP.” 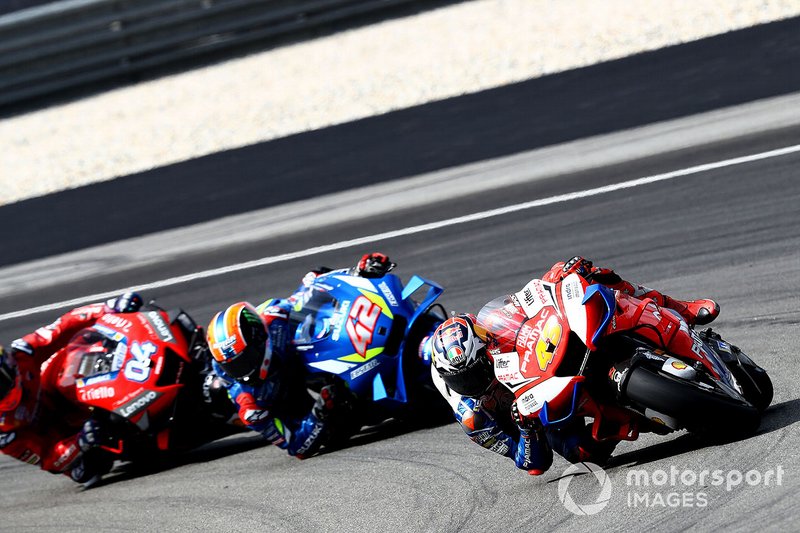 How Quartararo won the first fight for 2020 supremacy

Miller: Time at Ducati "a game changer" for my MotoGP career

Martin: Losing Australia MotoGP win by 0.8s is "killing me"