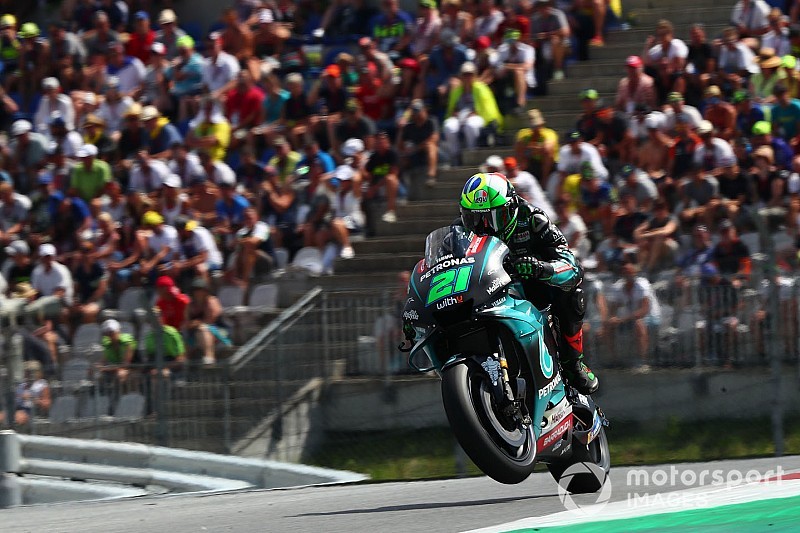 Petronas Yamaha MotoGP rider Franco Morbidelli set the pace in a wet/dry warm-up session for the Austrian Grand Prix, ahead of the factory Yamaha of Valentino Rossi.

Despite overnight rain and further showers in the morning, the Red Bull Ring had dried up sufficiently for slick tyres by the start of the 20-minute warm-up session.

Nearly half the pack emerged on track with slicks as the session got underway, with the rest of the riders switching to dry tyres after a single installation lap.

Morbidelli was the first rider to set a competitive time, going top of the timesheets with a 1m33.774s.

Rossi went nearly two seconds quicker on his first flyer, before Avintia Ducati’s Karel Abraham enjoyed a brief stint at the top with a time of 1m31.668s.

Rossi then managed to shave another three seconds from his previous benchmark, only for Morbidelli to upset him moments later by clocking the circuit in 1m28.803s.

With rain returning on the track at the seven-minute mark, Morbidelli’s time would remain unbeaten for the rest of the session as all riders dived back into the pits to put on wet compounds.

Rossi’s time of 1m29.197s was also unchallenged as he held on to second, ahead of Abraham and the second Avintia Ducati of Tito Rabat.

Marc Marquez stood outside the top 10 when the race hit the track just before the mid-point of the session, but managed to set a time of 1m33.038s on wet tyres to end up seventh in the final classifications.

He headed the factory KTM of Johann Zarco, Suzuki’s Alex Rins and the Pramac Ducati of Jack Miller, who completed the top 10.

Maverick Vinales wound up 11th, ahead of the factory Ducati duo of Andrea Dovizioso and Danilo Petrucci.