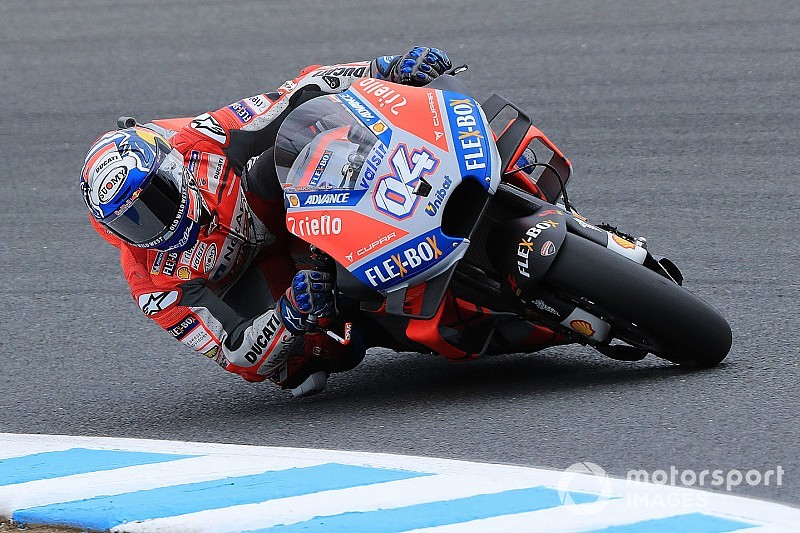 Andrea Dovizioso led the way in opening practice for MotoGP's Japanese Grand Prix, heading Cal Crutchlow by a little over a tenth of a second.

Ducati rider Dovizioso left it until the final five minutes of the 45-minute session to move atop the timesheets, posting a 1m45.738s lap to depose long-time leader and champion-elect Marc Marquez.

The Italian then lowered the bar to 1m45.358s, which Marquez couldn't match in the closing stages, the Honda man falling 0.140s short of Dovizioso on his last attempt.

Maverick Vinales was the best of the works Yamahas in fifth, 0.282s off the pace and four tenths clear of sixth-placed Andrea Iannone (Suzuki).

Satellite Ducati riders Alvaro Bautista (Nieto) and Jack Miller (Pramac) were next up, followed by the second works Yamaha of Valentino Rossi, who wound up 0.971s off the pace and 0.7s slower than Vinales.

Aleix Espargaro (Aprilia) edged out Dani Pedrosa (Honda) for the final place in the top 10.

Local hero Takaaki Nakagami was 13th quickest aboard the second LCR Honda, two places ahead of Yamaha wildcard Katsuyuki Nakasuga, who briefly headed the times in the early exchanges.

The other Motegi wildcard, Sylvain Guintoli, was 21st fastest on the third Suzuki, two places behind Alex Rins, who was nearly rear-ended by Marquez in the opening stages of the session.

Bautista crashed late in the session at Turn 1, while Franco Morbidelli (Marc VDS Honda) went down at Turn 10 early on.

Jorge Lorenzo completed just two laps on the second works Ducati before returning to the pits and withdrawing from the remainder of the weekend, still in pain from the injuries he suffered in Thailand.

It reduces the field to 25 bikes, with Nakasuga and Guintoli having originally bumped up the entry to 26.

Lorenzo withdraws from Motegi MotoGP round