The Japanese Grand Prix will be remembered for being the place that Marc Marquez secured title number three - but who else stood out at Motegi? Valentin Khorounzhiy offer his assessment.

There's little excuse for being surprised by Rossi raising his game between practice and qualifying anymore, as it's something he's been doing virtually all season – but the 1m43.954s pole lap at Motegi was a massive effort even by his lofty standards. A subpar start to the grand prix, however, meant he had to throw caution to the wind, trying risky moves on Marquez early on and then eventually crashing out. Given the points picture, he had to risk it – and the risk didn't pay off. 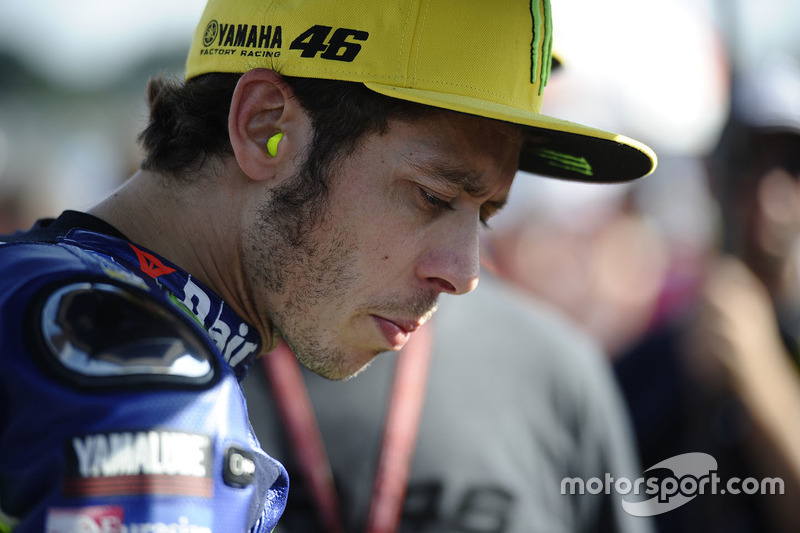 Lorenzo really did deserve better from Motegi, having persevered even after a massive FP3 crash dashed his status as the weekend's early favourite. He qualified very well and was impressive in the race, storming to an early lead and then settling into a reasonable, if not race-winning pace despite making what he insists was the wrong tyre choice. Marquez deserved to be crowned at Motegi, sure, but Lorenzo's late-race crash was still a bit of a kick in the guts. 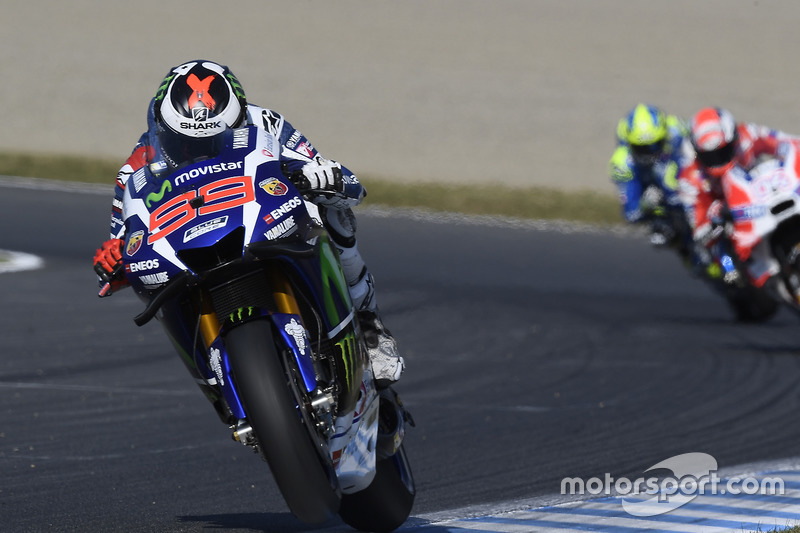 His qualifying was a bit messy by his usual standards, but there was no need to chase record laps – and definitely no need to risk pushing too hard and getting injured in a crash. On Sunday, Marquez was simply sublime, quickly working his way into the lead despite the challenge from Rossi and then checking out to seal win number five of the year. A great culmination to an incredible campaign. 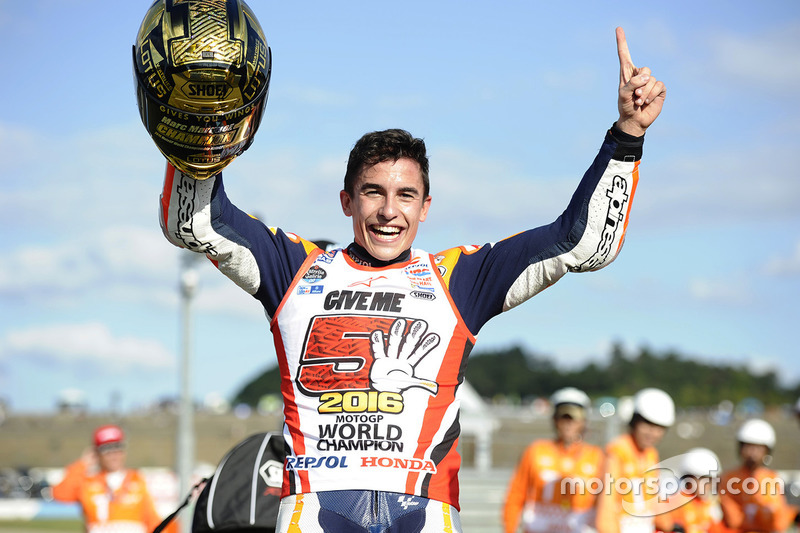 A last-minute replacement for Pedrosa, local man Aoyama was up against it in his first MotoGP start since the Sachsenring last year, only taking over from the injured Spaniard on Saturday morning. Crashes in FP3 and FP4 did little for his confidence, meaning it was no great surprise when he qualified 22nd and last, but he deserves credit for keeping it together in the race to bank a point for 15th. Still, it isn't hard to see why Honda has drafted in Nicky Hayden for Phillip Island instead. 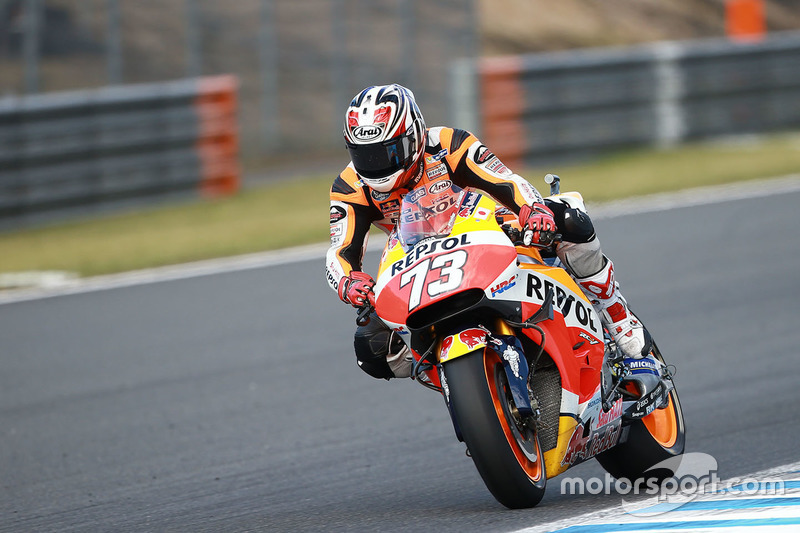 After the last few grands prix, Ducati needed a good result at Motegi – and Dovizioso duly delivered. Best of the rest behind the usual suspects, both over one lap and over a race distance, he saw off the challenge from Aleix Espargaro early on in the race, putting himself in position to benefit from the Yamaha duo crashing out to take second. And even if Lorenzo had stayed on the bike, there's a chance Dovi would've still gotten ahead. 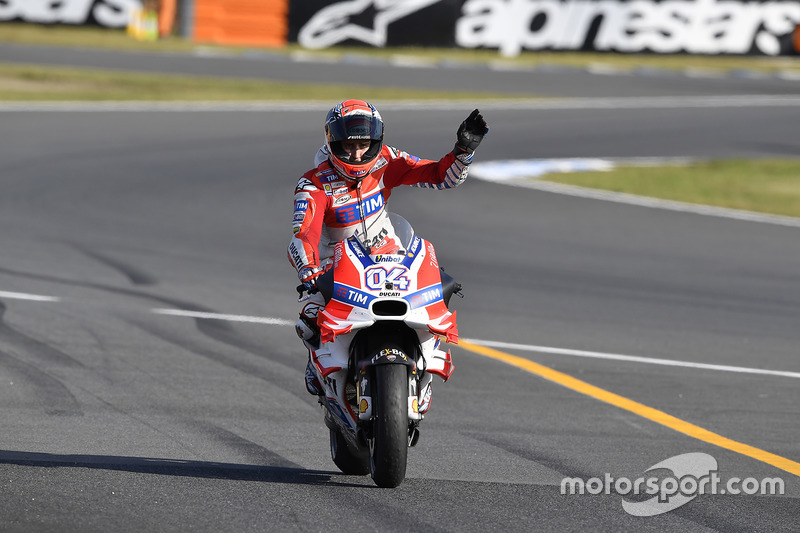 Despite the non-score, it took Ducati virtually no time to confirm Barbera for another race aboard the GP16 in place of the absent Iannone, meaning the Spaniard must have given a very reasonable account of himself. He did take a little bit of time to adapt to the bike and was second fiddle to Dovizioso for all weekend but FP3, when he actually got really close. In the race, he crashed while trying to make up for a slow start – but his pace seemed solid enough before that. 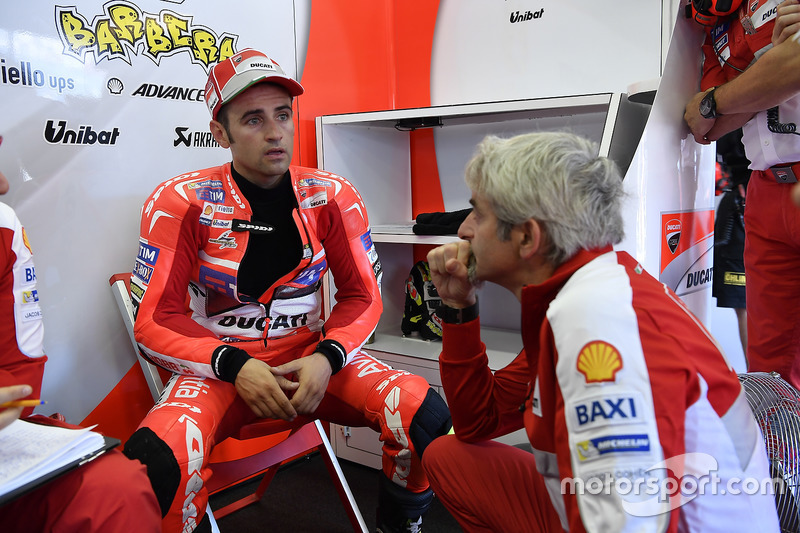 For much of the weekend, Vinales looked the second-best rider at Suzuki (if not by much), but the Yamaha-bound Spaniard has gotten very good at grinding out results – and at Motegi, that skill was rewarded with a podium finish. The Japanese GP was another chapter in a spectacular season, Vinales' success illustrated by the fact that future teammate Rossi's gap to Marquez in the points is now more than twice what Vinales trails the Italian by. 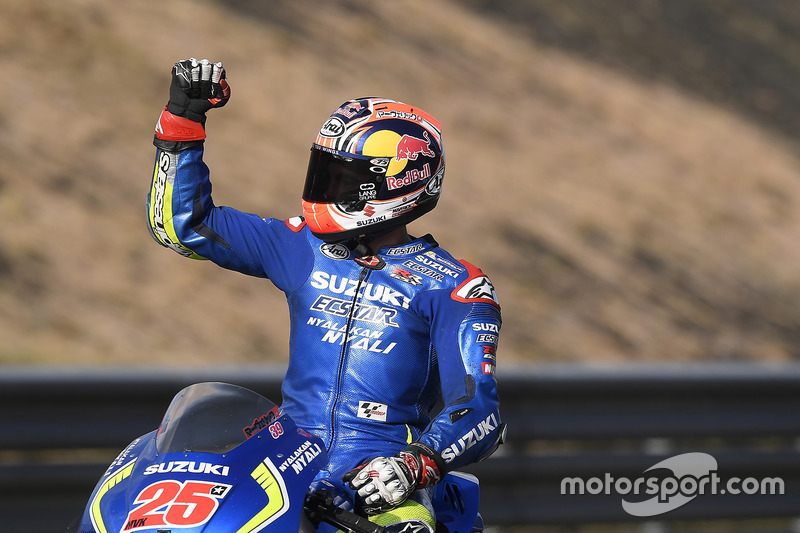 Overshadowed by his teammate for the majority of the campaign, Espargaro was the Suzuki benchmark for all of Saturday and most of Sunday – except for the brief stretch that counted most. His impressive pace on used tyres in Saturday practice was noticed by his rivals, but it never quite materialised in the race the same way it had for Dovizioso and Vinales. Still, fourth and just four seconds off the race winner is nothing to scoff at. 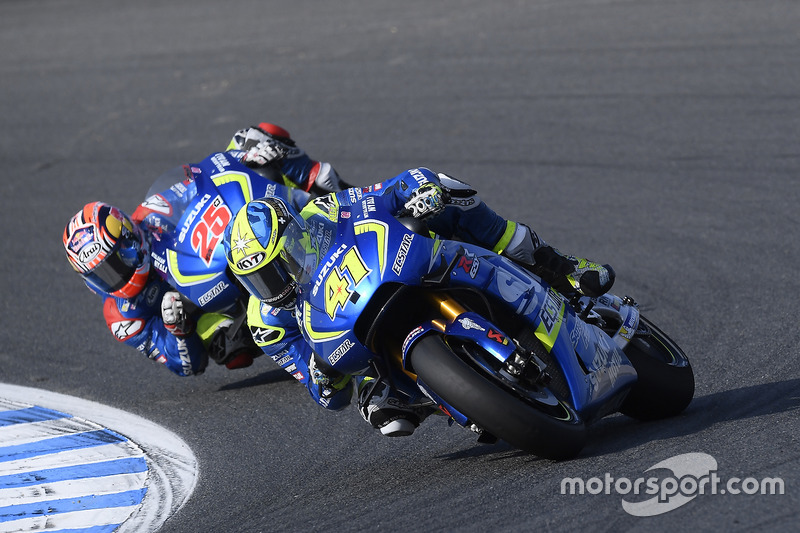 Yet again the best independent rider by far, Crutchlow managed to outfox both Suzukis in qualifying – but reckoned he could've had a front row spot. Still, a podium bid might have been a stretch even if he hadn't gone through the gravel on lap 17 while trying to follow Vinales. He still brought it home in fifth and now holds the distinction of having outscored everyone but Marquez over the past seven races. 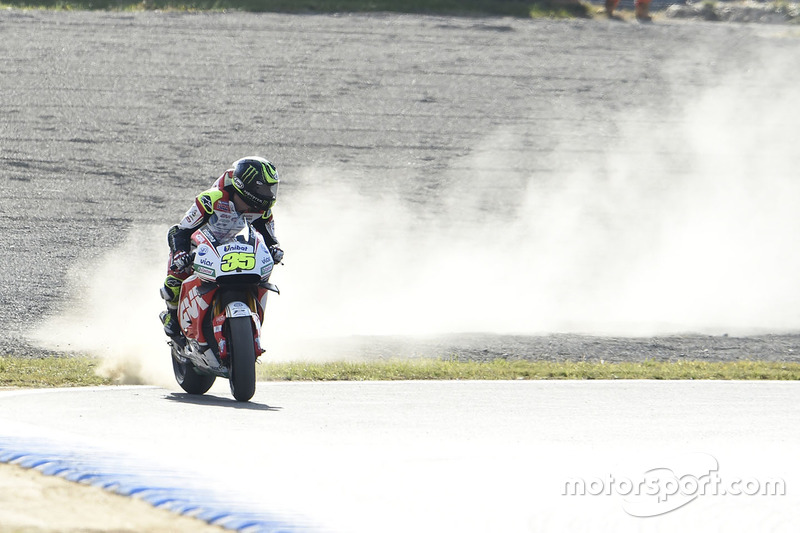 While the factory Yamaha team has lost its early-season form, Tech 3 remains where it's been for much of the season – and Pol Espargaro is continuing to regularly bank points. Clearly the second-quickest privateer in the field (well behind Crutchlow, and well ahead of the Pramac pair) he started ninth and brought it home in sixth, benefitting from crashes for Rossi and Lorenzo and holding off Barbera until the Ducati rider fell. 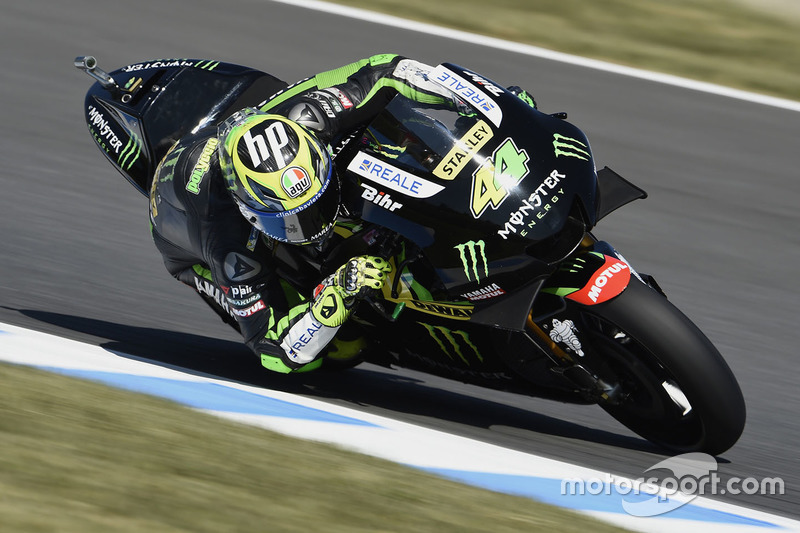 Smith is still clearly not anywhere near 100 percent and thus expectedly began the weekend seriously adrift of where he would normally be expected run. But he was significantly quicker on Saturday and managed to run the race at a very consistent pace, banking a 13th-place finish. Considering where he had been on Friday, this was a fine effort. 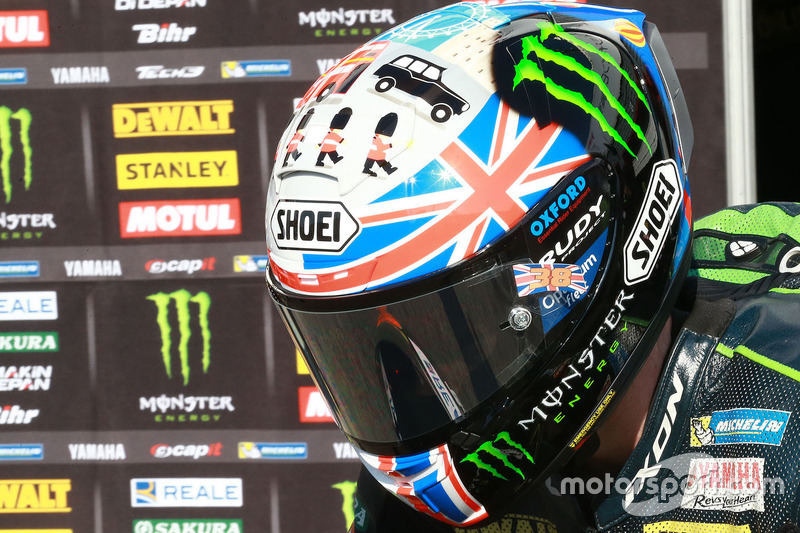 For both Pramac and Petrucci, this was a significant upturn from the Aragon weekend where he'd helped teammate Redding crash and where the team just generally had no pace. The bike was clearly a bit quicker this time around, but Petrucci could not challenge fellow privateers Crutchlow and Pol Espargaro. He did beat Redding, however – first to an automatic Q2 bye in FP3, then in Q2 and then in the race. 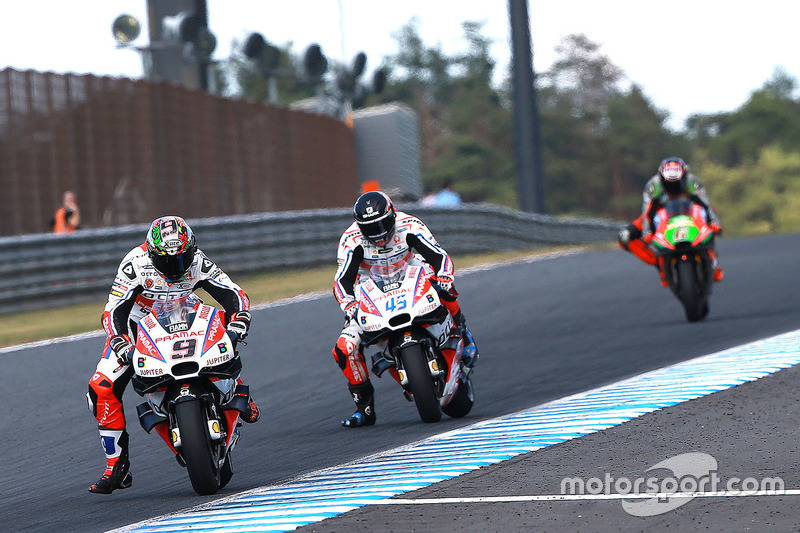 But for the most part, Redding's deficit to Petrucci was virtually non-existent. After trailing Petrucci by 0.01s in FP3, he was, admittedly, pretty lucky to get through Q1 thanks to Stefan Bradl crashing and then lost out to his teammate by half a tenth in Q2. In the race, he took the chequered flag a quarter of a second off. There is still nothing between these two in the fight for the GP17 next year. 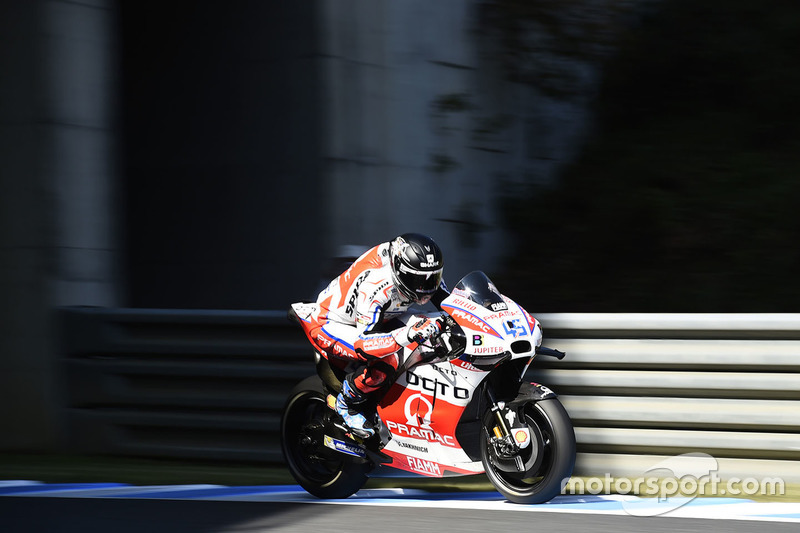 Aprilia's still a ways away the other factory teams, but it's a least starting to pick off the independents. And while Bautista's seventh place only equals the team's previous best result this year, it's a big achievement as he beat both Pramacs on merit, despite a Q2 crash that forced him to start behind the pair. 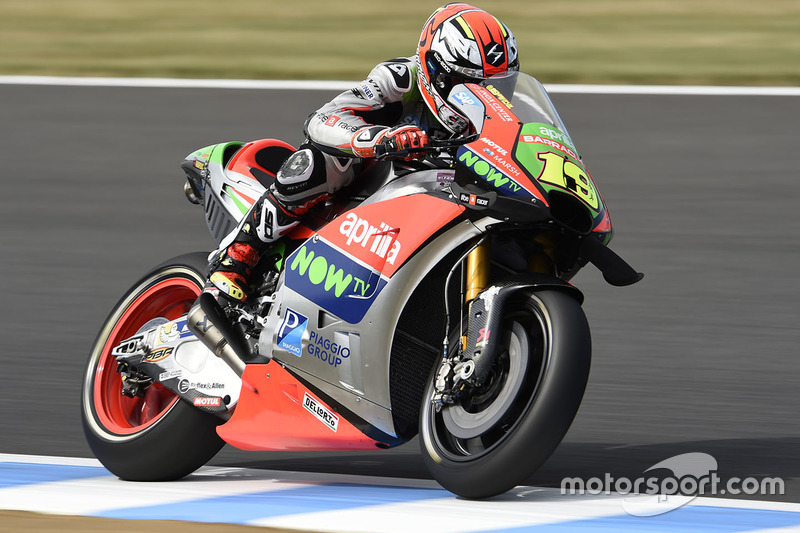 Bradl seemed exactly as quick as Bautista throughout the weekend and would've been through to Q2 with his teammates if he hadn't crashed out on his best lap. A poor start relegated him to P16 at the start of the race, but he recovered to a top-10 finish and even ran close behind Redding before dropping back late on. 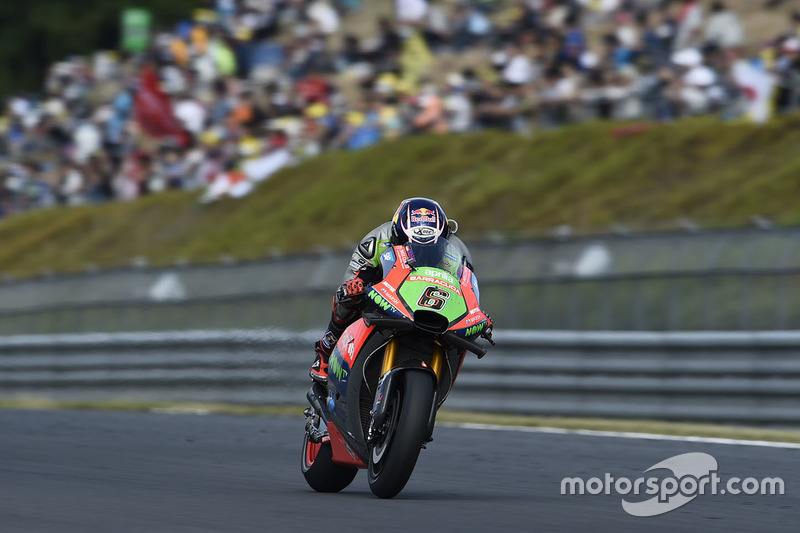