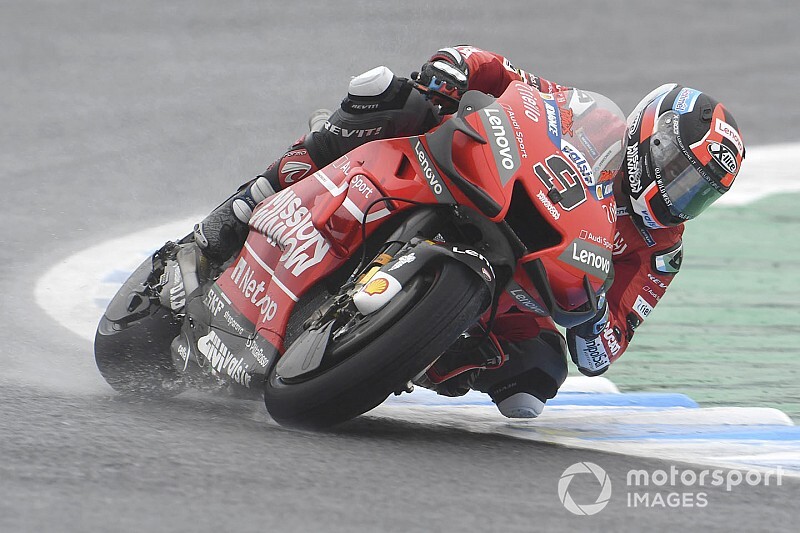 Honda man Marquez led a rain-delayed FP3 from virtually start to finish, breaking the 1m55s barrier 15 minutes into the session to put himself comfortably ahead of the opposition.

It wasn’t until 20 minutes to go in the session that any rider was able to lap within one second of Marquez’s best time of 1m54.884s, Suzuki wildcard Sylvain Guintoli impressing to set the second-quickest lap.

It appeared Marquez would end FP3 at the top of the timesheets, but Petrucci fired in a 1m54.710s to snatch the top spot moments after the chequered flag dropped.

Marquez failed to improve on his previous benchmark in his final run and ended up 0.174s behind in second, with Petronas Yamaha’s Franco Morbidelli improving late on to jump up to third.

Maverick Vinales was fourth on the leading factory Yamaha, while Guintoli slipped to fifth ahead of the second Ducati of Andrea Dovizioso and his Suzuki teammate Alex Rins.

Valentino Rossi was a distant 12th for Yamaha, while struggling Honda rider Jorge Lorenzo set the 22nd-quickest time in the wet, only ahead of former Moto2 champion Tito Rabat, whose session came to an early halt.

With the entire FP3 taking place on a damp circuit, there was no change in the combined classification, leaving Rins and LCR Honda’s Cal Crutchlow - who trailed in 20th place in FP3 - among others to navigate their way through Q1 in qualifying.