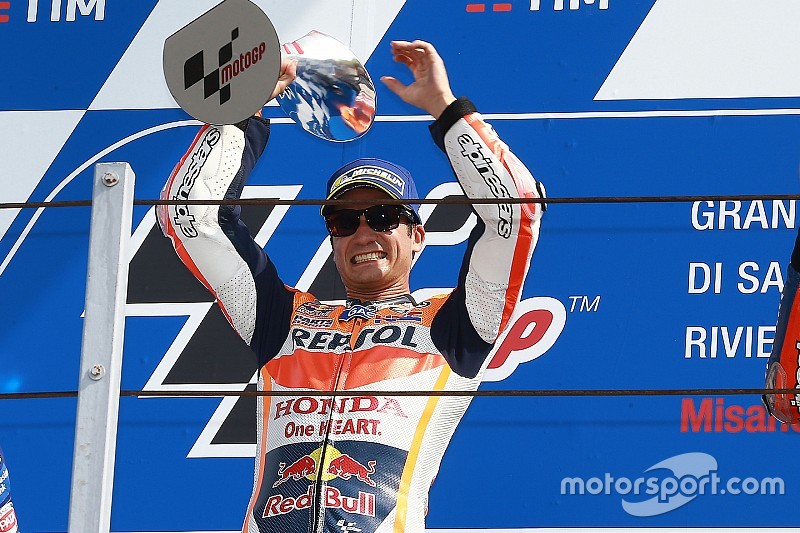 Pedrosa, 30, added to his own record of winning a MotoGP race in every season since 2006 – which makes 11 straight years – and has never failed to win a race during a season since graduating as the youngest-ever 250cc champion.

Despite all that experience, Pedrosa says he’s never seen anything like the amount of winners in the series.

“I’ve never seen something like this ever before with so many changes in the front,” said Pedrosa. “Now we need to keep our feet on the ground and focus on the next race and try to achieve the same level of performance.”

Although he rises to fourth in the riders’ points, Pedrosa admitted that he has struggled massively this season on his works Repsol Honda.

“There are moments where you see everything is dark,” said Pedrosa. “But it was a super day today, the rhythm was the key. I had a lot of laps with a very high pace I couldn’t believe. I tried to make no mistakes.

“I was not sure at the start of the race, because Valentino [Rossi] pulled away a lot. I was thinking the podium was a chance, but little by little I could see I was gaining on the three of them [Marquez, Lorenzo and Rossi]. I made good passes and still stick to my laptimes.

“It’s super-great feeling after so long having troubles. Everybody – friends, family and the team – stayed behind me and it’s in these tough times that you really need the help.”

Pedrosa was one of only two riders to start with a soft front tyre, and he revelled in the extra grip it appeared to give him as he carved his way to the front after qualifying down in eighth.

He surged to sixth at the start, passed Andrea Dovizioso and Maverick Vinales early on before outbraking teammate Marc Marquez, Jorge Lorenzo and Rossi in successive moves.

“My strong point this weekend was rhythm; I struggled in qualifying a lot and didn’t do a good lap time,” he added. “My lap yesterday was almost my laptimes today in the race.

“I never tried this tyre in the hot conditions, only in the morning, but it gave me a better feeling. That’s why I chose this one.

“In the race, I just forgot about it and concentrated on riding. The feeling came and I could stick to my laptime, that was the crucial thing in the race.”

Rossi: Second place "a shame" but victory was "impossible"