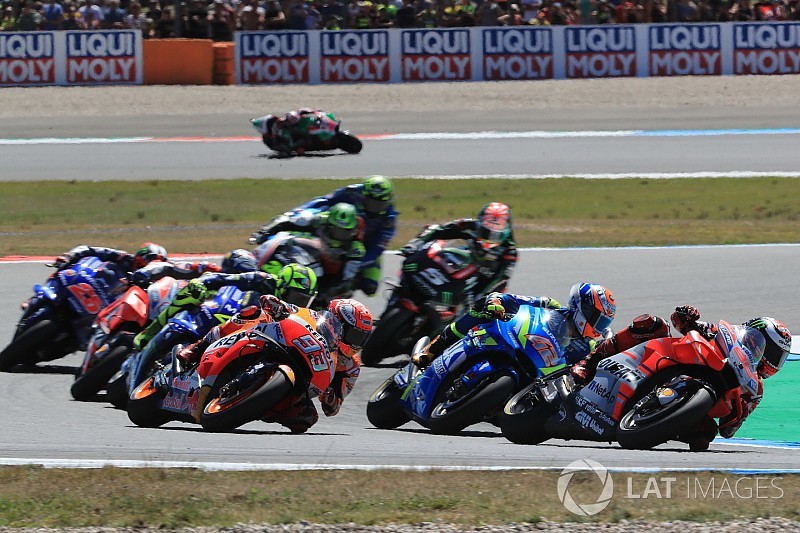 The Dutch TT at Assen featured a race-long battle between as any many as seven riders for the win, with winner Marc Marquez only managing to pull away in the final few laps.

Although pole-sitter Marquez, unbeaten at the Sachsenring since 2010, will start the race as the hot favourite, many riders expect a potential repeat of Assen because of the need to save their tyres.

LCR Honda rider Crutchlow reckons at least 10 riders will be able to fight at the front, but feels the Ducatis have the best option to maintain strong pace until the finish.

"I think it will be a big battle, I think there's gonna be a 10-rider battle at least," said the Briton, who will start seventh.

"Our bike is working very well, the Honda is working good not perfect in some areas, we're struggling with rear grip compared to our competitors.

"The Ducati seems to have the most grip for the moment and if one of them went to soft [tyre] I think it would be difficult... I don't think the tyre will drop for them as much as for everyone else if they run on soft they can probably keep it going."

Andrea Dovizioso also anticipates a pack race as riders will be having to manage tyre life "a lot".

"If every rider is thinking in a normal way, the approach of the race, everybody has to manage the tyre a lot – not just a little bit like in some races," said the Italian.

Valentino Rossi, who recovered from a poor Friday to qualify sixth, added: "Historically the Sachsenring is a track where there have been some memorable battles like in Assen.

"Maybe the leaders wait a while to not use up their tyres too fast, and we see a nice group of bikes.

"Seeing the times until now, there are many of us who will have the pace to stay in the leading positions, so maybe it will be a group race."

However, Marquez feels there is less slipstreaming at the Sachsenring compared to Assen, which would allow the lead riders to pull away more easily.

"Here it's true that the slipstream in Assen is much more important, you feel a lot," he explained. "Here the slipstream is not very important. You can keep your pace, you can find your rhythm.

"But we will see, because with the new tyre, like we see on the qualifying, everybody's fast.

"The first 10 laps, everybody's fast, everybody have a good pace. Then after lap 10, after lap 15, is when it start to be more complicated to ride the bike, more difficult.

"If Jorge [Lorenzo, starting from third] starts like in Assen, sure he will lead the race and he will push like always – but we need to be smart and try to understand that it's 30 laps."