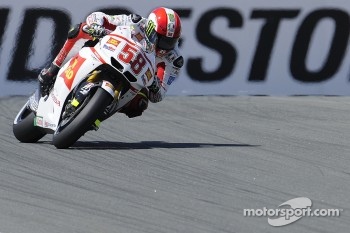 The MotoGP riders hit the track for the first practice of the weekend under cool (track 16ºC) conditions with wind that seemed to have been a factor in the five crashes, four of them in the fast turn 11 at the top of the hill, that marked the first half of FP1.

Simoncelli dominated much of the session despite the difficult conditions, setting a fastest lap time of 1'22.823, a second behind the lap record held by Dani Pedrosa (Repsol Honda). 0.181s behind the Italian was Stoner, who was the first rider in the field to crash, but returned unfazed to put in a time of 1'23.004.

Lorenzo, who completed 24 laps, the most of the field, was third in the timings, following the Australian by 0.042s, and ahead of Ducati rider Hayden by 0.159s. Repsol Honda’s Andrea Dovizioso followed in fifth, with Karel Abraham (Cardion AB Motoracing) riding strong to set a sixth fastest time of 1'23.416.

Dani Pedrosa (Repsol Honda), who had started session with good pace before crashing in turn 11, managed eleventh after reentering the session, ahead of Álvaro Bautista (Rizla Suzuki) in 12th with a time of 1'23.989. Cal Crutchlow (Monster Yamaha Tech 3) had an early runoff in turn 8, finishing in 13th position with a time of 1'24.162.

Valentino Rossi fell victim to the same corner 11, tumbling in the gravel, though walking away from the crash. The Italian was taken to the Medical Center to be checked out and was found to have no serious injuries, though the lost track time placed him 14th in the standings, while Toni Elías (LCR Honda) only completed a total of seven laps after crashing twice, first in turn 11 and then in turn 1, to place sixteenth.