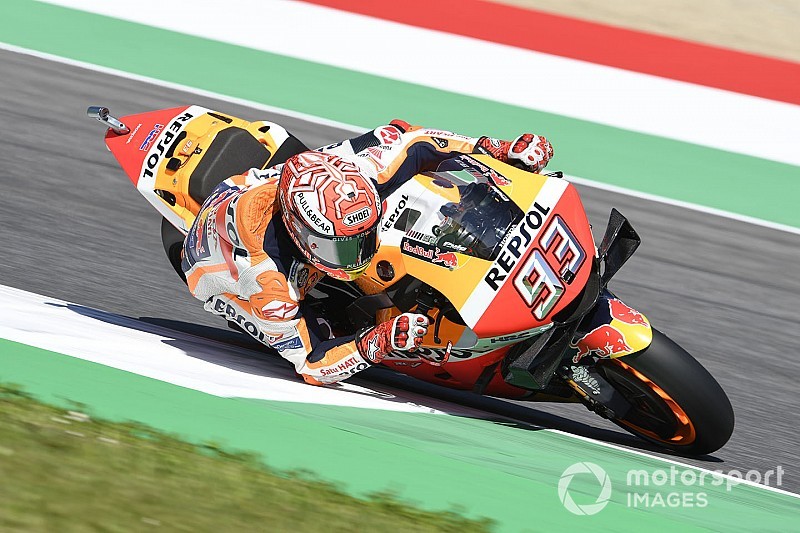 Honda man Marquez set his best lap of 1m47.558s just 10 minutes into the 45-minute session, eclipsing the 1m47.804s set by Ducati tester Michele Pirro - who is making the first of three planned wildcards this year on a third factory GP19 this weekend.

That lap went unbeaten for the session, with Pirro's time also proving good enough for second right until the chequered flag, when it was surpassed by Petrucci's 1m47.751s.

Petronas SRT rider Fabio Quartararo was another late improver, setting a 1m47.811s on the best of the Yamahas to go fourth-fastest.

Aleix Espargaro, whose best lap was aided by a tow from Marquez in the early running, was fifth-fastest for Aprilia, although his session was curtailed by a technical problem that resulted in him parking up at the end of the straight.

Ducati's Andrea Dovizioso was 0.656s off the pace in 10th, while Valentino Rossi was the quicker of the works Yamahas in 12th, just behind Alex Rins' Suzuki.

Maverick Vinales was 14th, albeit just 0.036s slower than Rossi, on the second factory M1.

Jorge Lorenzo continued his Honda struggles in 18th, a little under a second adrift of Marquez, while Johann Zarco was 20th on his factory KTM in a virtually incident-free session.

Petrucci could quit MotoGP if not retained by Ducati