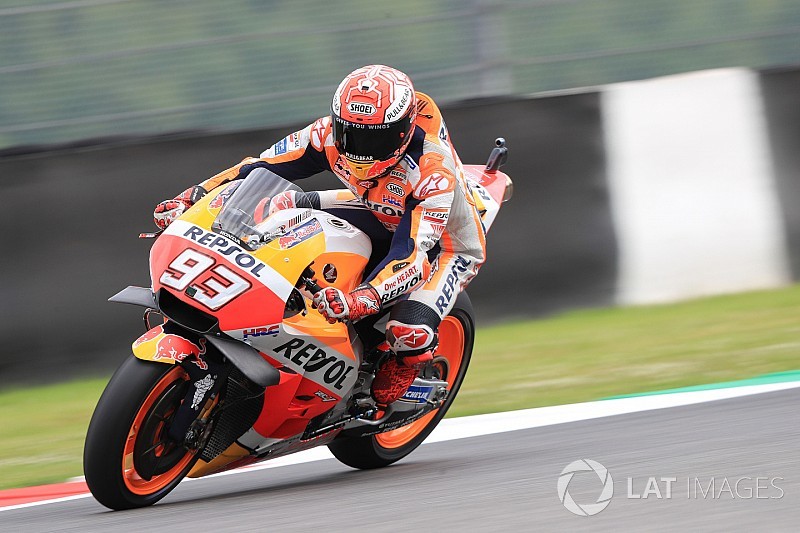 Vinales had ended Friday's running second-fastest, but could not improve on his laptime in FP3 and was knocked out of the combined-classification top 10 at the death.

Having convincingly topped both of Friday's sessions, Suzuki's Andrea Iannone was into the lead once more six minutes into FP3 and concluded his first run two tenths clear of LCR's Cal Crutchlow.

Pramac Ducati rider Danilo Petrucci soon edged a few hundredths closer to Iannone's 1m47.236s effort, and remained in the runner-up spot until teammate Jack Miller, who had crashed at the Correntaio right-hander earlier in the session, improved to just 0.066s off the Suzuki man's pace.

As late-session soft-tyre time attacks kicked off, Iannone was finally deposed by compatriot Valentino Rossi, the Yamaha rider dipping below the 1m47s mark.

Shortly thereafter, Honda rider Marquez fired in the best lap of the weekend so far, eclipsing Iannone's Friday benchmark with a 1m46.439s.

His lap also surpassed the pole record, which had likewise been set by Iannone, on a Ducati back in 2015.

Ducati's Jorge Lorenzo improved to second place behind Marquez, before being relegated to third by Rossi at the chequered flag, as the Yamaha man wound up 0.336s slower than the Spaniard.

Iannone ended the session in fourth, ahead of Tech 3 Yamaha's Johann Zarco, Petrucci and Crutchlow.

Miller and Honda's Dani Pedrosa are the other frequent frontrunners who will be joining Vinales in Q1.