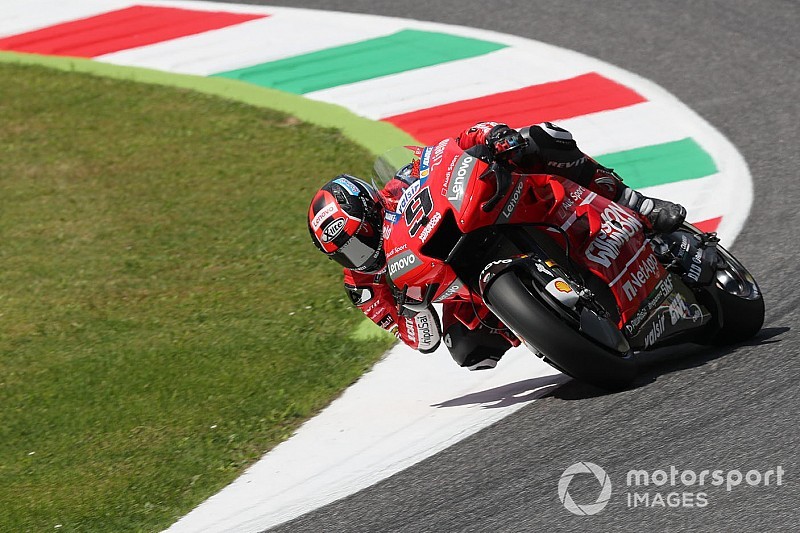 Local man Petrucci recorded a 1m46.056s, surpassing the previous record held by Valentino Rossi, while both Rossi and Petrucci's teammate Andrea Dovizioso ended up missing the cut for automatic progression to Q2.

Fellow Honda rider Takaaki Nakagami then equipped a pair of softs to eclipse Marquez by a tenth at the halfway point of the 45-minute session, before following that up with an improved 1m46.456s lap.

His place at the top was initially threatened by Petronas Yamaha rider Fabio Quartararo, the French rookie lapping half a tenth slower on two successive laps but ultimately coming up short.

However, Petrucci then smashed Nakagami's benchmark by four tenths of a second, securing first place in FP3.

Marquez fitted a soft rear late on and ended up third, behind Petrucci but also KTM rider Pol Espargaro, who followed Honda's reigning champion on his fastest lap and wound up 0.017s faster, yet two tenths down on Petrucci.

Nakagami settled for fourth, as Pramac Ducati rider Jack Miller slotted in between him and Quartararo.

Factory Yamaha rider Maverick Vinales was facing Q1 heading into the final minutes, but picked up the pace to finish seventh, securing an automatic Q2 bye.

Dovizioso struggled to put a lap together and wound up three hundredths of a second behind the crucial 10th place, while Rossi ran through the gravel at the final corner, Bucine, during his fastest lap in the dying seconds of the session.

Among those joining them in Q1 will be Honda factory rider Jorge Lorenzo and Ducati wildcard Michele Pirro.

The two Suzukis of Alex Rins and Joan Mir will also contest Q1, the former failing to improve on his best effort on Friday after his session was compromised by an early crash at the Palagio left-hander on the out-lap during his opening run.

Recovering Pedrosa to test KTM at Brno next week