Nakagami felt like his bone was "breaking in every corner" 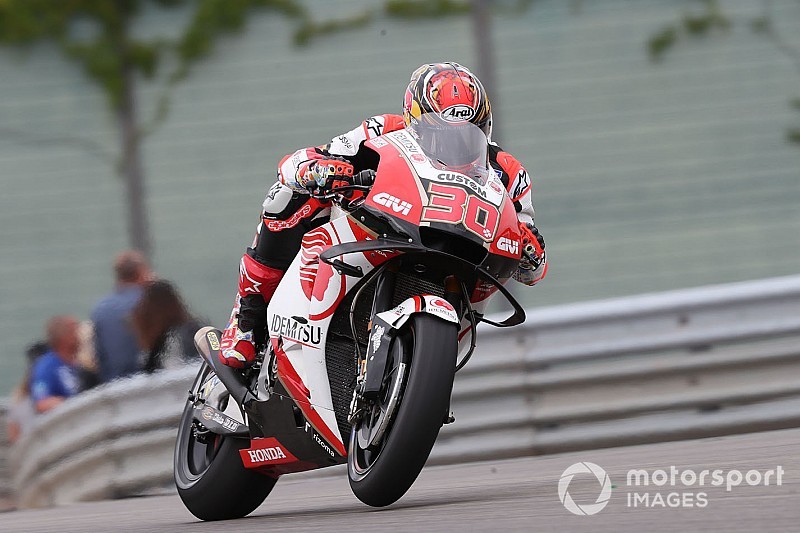 LCR Honda MotoGP rider Takaaki Nakagami says he felt like his ankle was breaking every corner during Saturday's German Grand Prix running at the Sachsenring.

Nakagami was wiped out by Yamaha rider Valentino Rossi early in last week's Dutch TT, and though he didn't suffer any broken bones, he has struggled with an injured left ankle since the crash.

Despite this, he managed to bump Ducati's Andrea Dovizioso out of qualifying by going second quickest at the death of Q1, and went on to place his Honda ahead of Rossi in 10th.

Nakagami admits after 10 laps of a race run he can no longer “hold onto the bike”, and says his current situation is a “disaster”.

“During FP3 I felt really bad, the pain is incredible and the situation was getting worse,” he said.

“Before FP4, we had an injection to reduce the pain but it didn't help. The flexibility is okay, but the biggest problem is I cannot force [my foot] on the ground and on the foot peg, because if I even put it on the peg the pain is so sharp.

“This is the main thing. Maybe I cannot finish the race, because [I can manage] only 10 laps, maximum 10 laps. [After that] I can't hold onto the bike. The pain is incredible, and the feeling is like every corner I break the bone.

“So I'll talk with the doctors, with the Clinica Mobile, because they are really helping a lot every day.

“But unfortunately during FP3, I don't know why, but at one moment I feel the situation is a disaster.

“Anyway, of course I will do my best because there's only one day left, and after that we have a summer break.”

Commenting on his shock Q1 graduation, Nakagami says even his team was surprised by his lap, and is happy to be able show his “potential” on the year-old Honda despite his physical condition.

“I'm very surprised, because I knew when I did the last lap, very close to maybe P2 or P3 or P4,” he added. “We didn't know the end of the situation, [then] I saw I was P2. I think nobody expected it, even in our team because I saw on the TV all my staff very surprised.

“This is very good because I did the best until the last, and we made an improvement. So this is good for the team, good for me. Really happy I can show our potential, even in this condition.”