Promoted: The new PETRONAS oil that boosted Quartararo in Assen

The result could not have been better for Petronas after unveiling the second strand of its potent performance oils in MotoGP. Petronas Yamaha Sepang Racing Team’s Fabio Quartararo used his Yamaha M1 to set a third pole position of 2019 at the historic Assen TT circuit ahead of a second consecutive podium for the rookie on Sunday.

Less than four hours after stopping his #20 bike, complete with Petronas Tutela gear oil and Petronas Sprinta engine oil – the latter used for the first time – Quartararo unveiled the new product in front of international media. 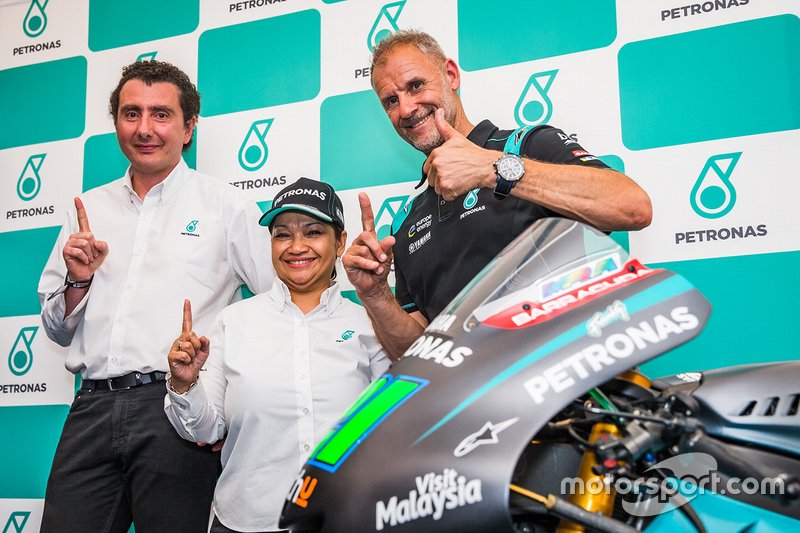 Quartararo’s brilliant lap on Saturday around a race track renowned for its speed and technical demands was the latest achievement in what has been an impressive campaign to-date for the new crew, and the installation of PETRONAS’ product and engineering into the MotoGP paddock. The second podium of the year then came on Sunday as Petronas Yamaha Sepang Racing Team also led a MotoGP race for the first time.

“We are very pleased because we thought it might take a few years before we would come to the level we have today,” smiled Noor Afiza. “MotoGP is a very important platform for us. It is the highest level of competition in two wheels so when we first started the project we expected it to be completed in two years. And today, less than a year, we managed to bring onboard two products – one for the gears (PETRONAS Tutela) at Qatar – and today PETRONAS Sprinta (engine oil). We are very, very happy with the performance, and not only with the team because today it has been perfect to make this announcement while on Pole.

“For the engines, we’re using about 800 litres a year and around 500 of gearbox oil,” revealed Zeelenberg, a former grand prix racer who took three podium finishes at Assen. “We all know MotoGP engine combustion and RPM and temperatures are amazing – very high – and to make something in such a short period of time that functions so well is really impressive and we are very happy with it.”

Dr Dolfi explained some of the work and chemistry – as well as the challenges – that went into the completion of PETRONAS Sprinta oil and how the company were able to count on a very comprehensive collaboration with Yamaha; even visiting the Japanese manufacturer at their HQ in Iwata.

“It has been quite an amazing journey for us because we were tasked with a tight time schedule to deliver some very important results,” he commented. “We started with the PETRONAS Tutela gearbox oil and not because it was the easiest but it was the product that concerned us the most: the gearbox is paramount to the rider’s safety. If something breaks down then it might become stuck, broken and the rider could crash while riding at 300kmph.

"So it was important and a number one task: safety first, then performance. Then we started with PETRONAS Sprinta engine oil and this is again delivering performance but with reliability. Reliability is an important part because there is no point in going faster and having more power if you damage the engine or do not finish the race.”

“The key for this success, which we are starting to enjoy right now, is the collaboration between us (PETRONAS) and Yamaha,” he added while holding a vial of the PETRONAS Sprinta Oil. “Yamaha opened their doors and they laid bare the engine. I saw all the high tech pieces for me to understand faster the implications of our lubricants, how to make it better, more reliable at the same time deliver performance. Collaboration has been key and, of course, at the beginning, we were in a tight time schedule. The next step is to move even further in terms of partnership and tackle the development of what is called ‘co-engineering.”

Quartararo has impressed in his debut season, much like Yamaha has in the first half of its first campaign.

“We adapted quite fast to this bike and in Qatar is where we already felt that the Yamaha was in good shape with the team,” he said. “I think the comfort we have here, with all the partners, people and support of experts like PETRONAS, is like a family and this is really important in MotoGP.”

Zarco had to exit Dutch TT "before something bad happened"