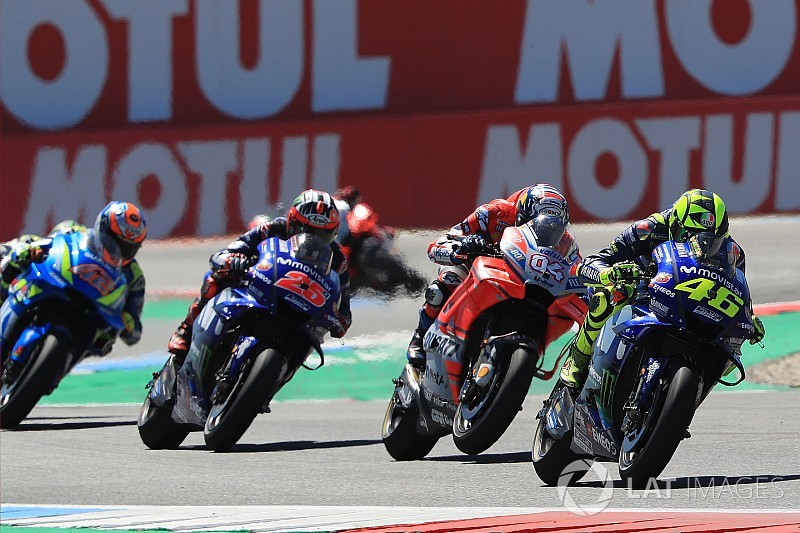 Valentino Rossi has put his failure to score a podium finish in the Dutch TT at Assen down to an over-aggressive move by MotoGP rival Andrea Dovizioso.

While Marc Marquez made a late breakaway from what had been a six-strong lead group to take victory, Rossi was in the thick of the fight for the runner-up spot until the start of the penultimate lap.

He passed Dovizioso for second at the final chicane, but the Ducati rider went side-by-side with him into Turn 1.

Both riders ended up going wide and, with Dovizioso just about making the corner while Rossi, running on the outside line, was forced to go through the escape area.

Rossi dropped to sixth as a result, and was only able to gain one position back at Cal Crutchlow’s expense before the end of the race.

The 2017 Dutch TT winner said Dovizioso’s move was “not clever” as it allowed both Alex Rins and Maverick Vinales to go through and take the remaining spots in the top three behind Marquez.

“I’m for sure a bit sad because I think I could have arrived on the podium, but in the end I arrived fifth,” Rossi lamented.

“During the race I try to control a little bit, because I have the soft rear [tyre], I know we are a bit on the limit, I tried always to stay in the first group.

“I tried to attack, two laps to go I was in a good position and I had the potential [to finish on] the podium.

“But Dovizioso tried to overtake me at the first corner, I was very strong on braking and unfortunately he arrived too fast and I had to go out of the track.

“It was an aggressive overtake but we saw a lot today, minimum 25 [examples].

“For me it was strategically not very clever, because me and Dovi could have arrived second and third and like this we lost a lot, we arrived fourth and fifth.

Dovizioso said he understands Rossi's annoyance to lose out on a podium position, but also reckons the Yamaha rider made a mistake to challenge him on the outside line of Turn 1.

"If I put myself in Valentino['s situation] I can understand because he was for sure in some [strong] position but I didn't make something over the limit.

"I think he did a wrong decision because when you are outside to release two times the brake when inside there is one of the hardest brakers, I think is a bad idea at the end of the race.

"This is what happened, I am sorry for him but this is the reality.

"At that time both riders, we would like to exit in front in Turn 1 but he was outside so I control the brake.

"For example Marc [Marquez] and Maverick [Vinales], they did the same things but they push a bit more and they went out of the track."