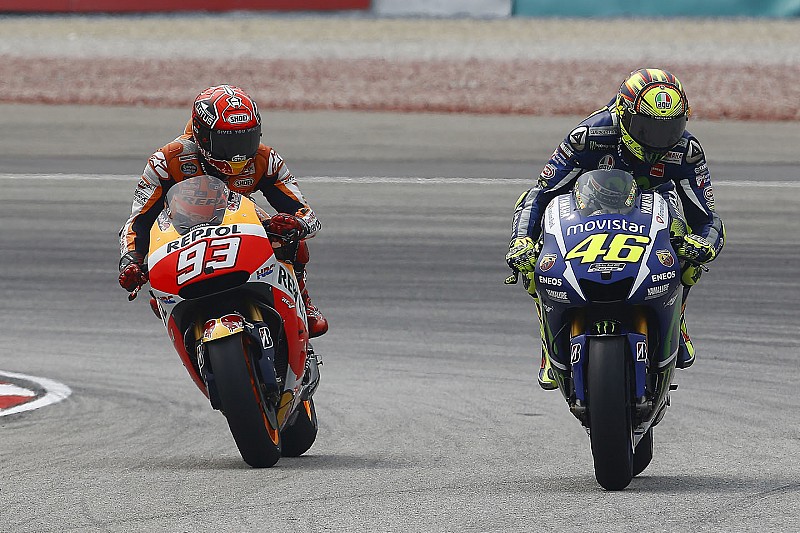 Valentino Rossi stunned the MotoGP paddock when he turned on Marc Marquez on Thursday at Sepang - but the nine-time world champion's strategy backfired badly during the race, as Jamie Klein explains.

It all started with Valentino Rossi's incredible comments in Thursday's press conference, when the Italian accused Marquez of favouring Jorge Lorenzo's title bid during the previous round at Phillip Island.

When The Doctor says things of that gravity, he does so for a reason, although why he chose to pick that particular fight remains a source of contention.

The best explanation seems to be that Rossi was challenging Marquez to prove him wrong, and to dominate the last two races of the season.

Him doing so would have made Rossi's life considerably easier by giving Lorenzo less opportunity to win and carve into his slender points advantage.

But, if this was indeed the Italian's intention, it backfired in spectacular fashion.

His integrity under attack, Marquez was understandably riled, and he made that perfectly clear on the track by trying to make Rossi's life as difficult as possible.

Marquez not blameless, but not punishable

Was it immature of Marquez to interfere with the title battle in such blatant fashion? Perhaps.

Did he deserve a penalty? No – his scrap with Valentino, at least until Turn 14 on the seventh lap, was no dirtier than many Rossi and Lorenzo have shared during their time as Yamaha teammates.

More to the point, as race director Mike Webb pointed out, at no stage did Marquez transgress the rules, even if his behaviour wasn't entirely saint-like.

Rossi, on the other hand, did break the regulations – through a deliberate action (running Marquez wide), he caused his rival to crash.

Whether he tried to kick Marquez in the process is immaterial, although such a move would have been futile in the extreme, as Rossi was at pains to point out when he offered his side of the story to the media post-race.

It may not have been his intention to send Marquez tumbling, but penalties cannot be awarded on the basis of what the accused party would like to have happened. Rossi made a mistake, one that broke the rules, and he deserved to be punished for it.

In fact, the opinion of many unbiased observers was that Rossi got off very lightly indeed, and a cynic would argue that the penalty of being forced to start from the back of the grid at Valencia was chosen so as to attract as many eyeballs as possible for the big title showdown.

Seeing Rossi carve his way through the pack in pursuit of a 10th world title promises to be a sight to behold, certainly – and he will be there, despite his threats to the contrary.

What if Marquez had taken out Rossi?

For those who complained that Rossi was treated harshly, imagine if the roles at Sepang had been reversed; if Marquez had forced Rossi wide and down onto the deck.

The 22-year-old would almost certainly have been black-flagged and be facing a one-race ban, if not worse, and Rossi's legion of fans would be calling for Marquez's head to be impaled on a spike – or at least those who aren't doing so already.

Why? Because it fits the narrative that many Rossi fans have chosen to embrace in spite of the facts – that Marquez is the irritating brat who has thrown his toys out of the pram and is now out only to destroy Rossi's championship chances, or even that he is part of some grand conspiracy along with Lorenzo and Dorna to ensure a Spanish champion.

Nonsense. If that was really the case, the most foolproof way of making that happen would have been to disqualify Rossi and give Lorenzo a nine point advantage heading to Valencia.

Besides, why would it be in Dorna's interest to actively try to prevent Valentino achieving a landmark 10th world title, bearing in mind the mass of publicity and casual interest in the sport this would generate?

So, going back to the original point – why did Rossi feel the need to stir up the hornet's nest in the first place with his remarks on Thursday?

Ultimately, only Marquez knows if he really was 'playing' with his competitors at Phillip Island as Rossi suggested, but to accuse the reigning champion of openly trying to scupper his title chances borders, frankly, on the ridiculous.

When he addressed the media after the press conference, Rossi failed to adequately answer one key question: why did Marquez, if he was indeed bitter about what happened in Argentina or at Assen, pass Lorenzo on the final lap in Australia and thus deny his compatriot five critical points?

Or, for that matter, why did Marquez deprive Lorenzo of victory at Indianapolis, and crash out in pursuit of his fellow two-time champion at Aragon?

No, Rossi's actions were those of a rider under incredible pressure. A rider who, at 36 years old, knows this may be his final shot at title glory. A rider who has finally met his match in Marc Marquez, whose incredible rise to power resembles very closely that of Rossi in the early 2000s.

One final thought: the only time Rossi has headed to the final round of a MotoGP championship with the title hanging in the balance was in 2006, when he had an eight-point advantage over Nicky Hayden.

That day in Valencia, Rossi cracked under the pressure – and he did so again on Sunday in the blazing Malaysian heat.