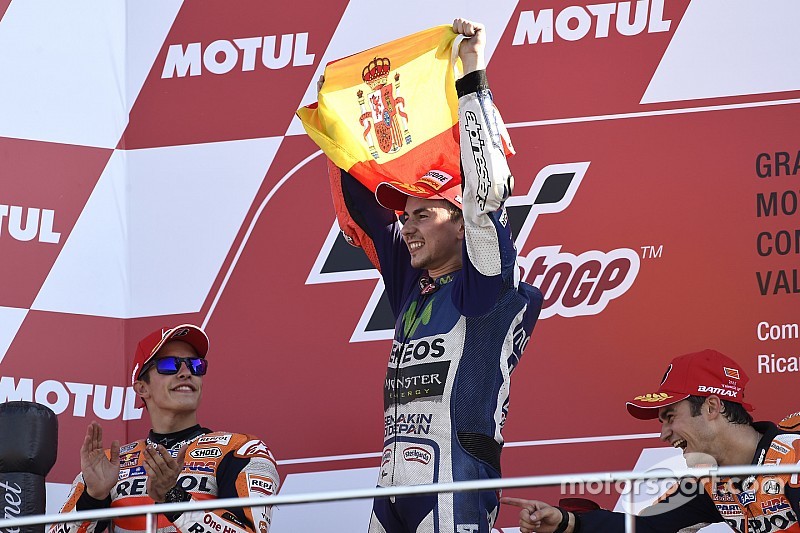 Was Marc Marquez really in cahoots with Jorge Lorenzo, or is this all a figment of Valentino Rossi's imagination? Charles Bradley wonders if we were swindled – or not – in the dramatic MotoGP finale...

At the time I didn’t see anything amiss with Sunday’s Valencia Grand Prix. I saw Jorge Lorenzo ride a brilliantly-judged, error-free race that earned his third MotoGP title, with Marc Marquez hounding him – sometimes mere inches off his rear wheel.

We knew the Hondas might struggle with front-tyre grip in the Spanish sun, and the fact that Dani Pedrosa couldn’t keep up with Marquez showed that he was either playing a waiting game, saving his front tyre, or just plain struggling.

It was only after the race, when Pedrosa said he’d been struggling with both ends of his bike, that I started to doubt what I’d seen a little. He spoke of how effortlessly he caught the leaders and, comparing his laptimes to leader Lorenzo, he took chunks out of him in the closing stages.

Then I thought about who was sitting behind Lorenzo at this point: Marquez.

This is Marquez, the absolute phenomenon; the overachiever of the seemingly impossible.

And what is Marquez not? Someone who sits on the back wheel of a rival and doesn’t make a concerted effort to pass – especially if that rider later admitted he’d “destroyed” his own rear tyre.

“The most aggressive rider I’ve ever seen ride a motorcycle is Marc Marquez,” said BT Sport pundit Neil Hodgson after the race. “The only aggressive overtaking manoeuvre he made all race was on his teammate.

“I felt like Marquez was defending Lorenzo, and I can’t believe I’m saying that.”

Of course Valentino Rossi, who lost his chance of an eighth premier-class title that day, said much the same thing after the race.

Any truth to that allegation?

Rewind to the start: Marquez made a terrible getaway, almost swiping out Aleix Espargaro’s Suzuki as he veered to the right off the startline. Meanwhile, Pedrosa had made his usual flying start, his waif-like frame always a benefit as his 250bhp-plus Honda launched away.

At Turn 1, Marquez took a huge lunge to Pedrosa’s outside, then nailed him brilliantly with an aggressive surge down the inside of Turn 2. Classic Marquez.

Then Marc appeared to turn into his stalker mode. If he’s running second, he often sits tight, gauges the leader’s pace without overstressing his tyres, and then pounces at the first sign of weakness and set sail for the horizon and another chequered flag.

But no, despite Lorenzo’s tyre issues towards the end, the only other time we saw Marquez get aggressive was when Pedrosa briefly passed him on the penultimate tour – before Dani outbraked himself into a downhill left-hander and Marquez swept past again and hung him out to dry on the exit.

Pedrosa took 2.2s out of Marquez in eight laps before then, showing that the leaders’ pace had dropped in the closing stages. Again, this is usually when Marquez makes his move – or at least falls off trying.

I’ll certainly listen to Rossi’s accusations about why Marquez never tried to overtake Lorenzo – especially when it came to the last lap. It did seem a little out of character for Marquez to be so reserved, as he’s never been backwards in coming forwards.

And for a Honda rider not to attack a Yamaha for a grand prix win (recall how Marquez approached the last corner against Rossi at Assen)? Most odd, when you think about it.

I wish, in hindsight, that Rossi’s appeal to the Court of Arbitration for Sport for a stay of execution for his back-of-grid start penalty had been upheld. Then we’d have seen a straighter fight in terms of whether Rossi could have finished in the position he needed to win the title, ideally in a four-way endgame duel.

But was that ever likely at Valencia anyway? Let’s look at the race pace between the two Yamaha riders…

The gap between Lorenzo and Rossi was 3.8s on the first lap, and 19.789s on the final tour. Of course, Rossi lost a heap of time in the 12 laps it took to get into fourth place, with some great overtaking moves along the way, but he dropped another six seconds to Lorenzo after that.

There was no doubt that the leaders were riding flat-out, certainly in the cases of Lorenzo and Pedrosa – only Marquez knows if he was riding to his maximum, as Rossi doubts. But there was little doubt too that Rossi hadn't got much in the way of frontrunning pace, even if he had started from the sharp end.

Rossi is sticking to his ‘Spanish conspiracy’ story, which he’ll no doubt bring to the proper CAS appeal (whenever that is). His legion of fans will echo his cry of foul play and many will say they’ll never watch another MotoGP race (well, until next time).

One thing we know for sure is that Marquez has now made a bitter enemy in Rossi, and that might come back to haunt him next year. We know too that these obsessive rivalries seldom end well…

The other fact is, as Honda pointed out on Sunday night, there's simply zero hard evidence to support Rossi’s claim that Marquez rode as “bodyguard” for Lorenzo. Marc adamantly refutes the claim, and says he rode as hard as he could, as always.

Even so, why now do I have a twinge of doubt about the whole episode?

Rossi: "I don't know where it will end" with Marquez