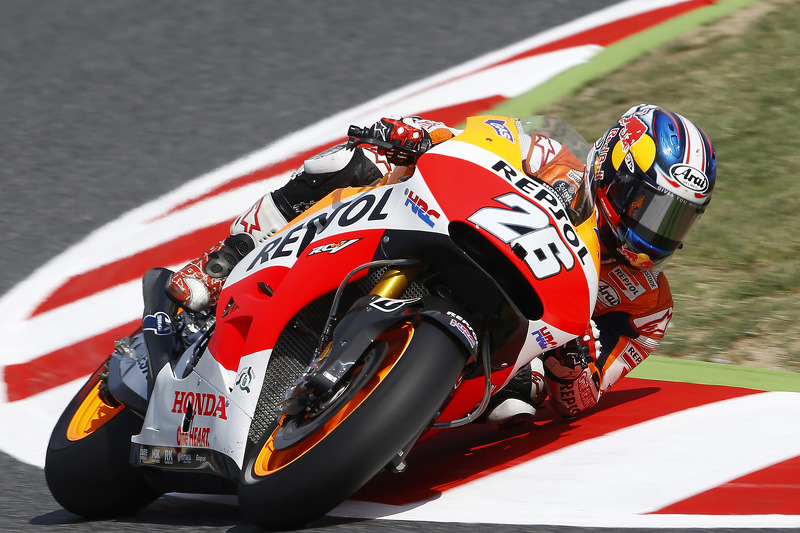 All Spanish front row with Pedrosa ahead of Lorenzo and Marquez

Dani Pedrosa secured pole position for the Repsol Honda team during today’s qualifying session for the GP Monster Energy de Catalunya with the Catalan rider delighting the home fans as did Jorge Lorenzo on the Movistar Yamaha YZR-M1 and Marc Marquez close behind in third place on the timing sheets despite a crash late on in the session.

I am very happy to have taken pole position today, in front of my family and the home fans!

Following a tricky first day at the circuit in Montmeló, Pedrosa managed to find something extra on the RC214V today and was right on the pace from the first lap and he eventually set a best lap of 1m 40.985s while Lorenzo also made more improvements in his machine’s set up and just .115s off the top time. Marquez was unable to execute his usual dominance on the qualifying session and even lost the front and crashed while pushing too hard going into last lap but nevertheless his best time of 1m 41.135s was still good enough to give the championship leader a front row start.

Stefan Bradl continues to lap near the front and the LCR Honda rider was able to hold off a late assault by Valentino Rossi with the Movistar Yamaha rider jumping 5 places on the final lap to grab the middle starting spot on the second row with a best time of 1m 41.290s. Aleix Espargaro will start from 6th tomorrow with the NGM Forward Racing man setting a best lap of 1m 41.308s while Andrea Dovizioso set the 7th best lap for the Ducati Team with a 1m 41.337s lap and Bradley Smith took 8th for the Monster Yamaha Tech 3 team with his best time of 1m 41.491s. 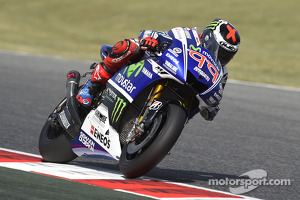 Taking the final spot on the third row was Yonny Hernandez for the Energy TI Pramac Racing squad with his best time of 1m 41.671s enough to start ahead of Pol Espargaro and the Monster Yamaha Tech 3 team with a 1m 41.677s lap who in turn starts ahead of Andrea Iannone in an uncharacteristic starting position of 11th while Alvaro Bautista also had a tough time today with the GO&Fun Honda Gresini having to battle in Q1 to make it into Q2 and while on a hot lap in the final 15 minute session the Spaniard high-sided and was taken from the track on a stretcher.

Taking his first pole position of 2014 was made all the sweeter in front of the partisan crowd as Pedrosa said afterwards, “I am very happy to have taken pole position today, in front of my family and the home fans! I am also delighted that, for the first time this year, I felt good on the bike in qualifying. I'll try and get a good start from pole position tomorrow, I am sure that it will be very hot and we will have to manage the tyres well during the race, but we will try to do as well as possible!”

Speaking after taking an all important front row start Lorenzo said, “I made a very good lap, I risked a lot, especially in the braking to make it. Finally we made a good setting for this track, it’s hard because with the track and temperatures it’s hard to make the bike stable. Tomorrow we will try to make it even more stable. We hope to remain consistent and strong like in Mugello to fight for the win again. We all hope it doesn't rain because a wet race would be difficult to judge. It would be great to win, everyone wants to!” 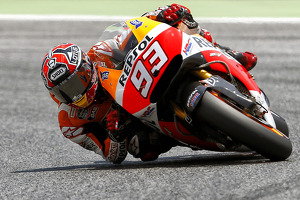 Marquez rued his mistake at the end of the session but remained upbeat about tomorrow’s race. He said, “Today I made the first mistake of the season, so I need to apologise to the team because it was my fault. The strategy we had set out was coming together perfectly, but when riding with the last tyre I braked too late. I knew it was my last attempt, so I tried to go into the corner anyway. That was not the best choice; I should have written off the lap, but these things happen when you are riding at home; you always try to give a little bit extra. We know for tomorrow that there is no more room for improvement on that corner and that we have a good setup with which to fight for the win."

Redding happy with progress on opening day in Barcelona

Bridgestone: Pedrosa on pole position for the Catalan GP