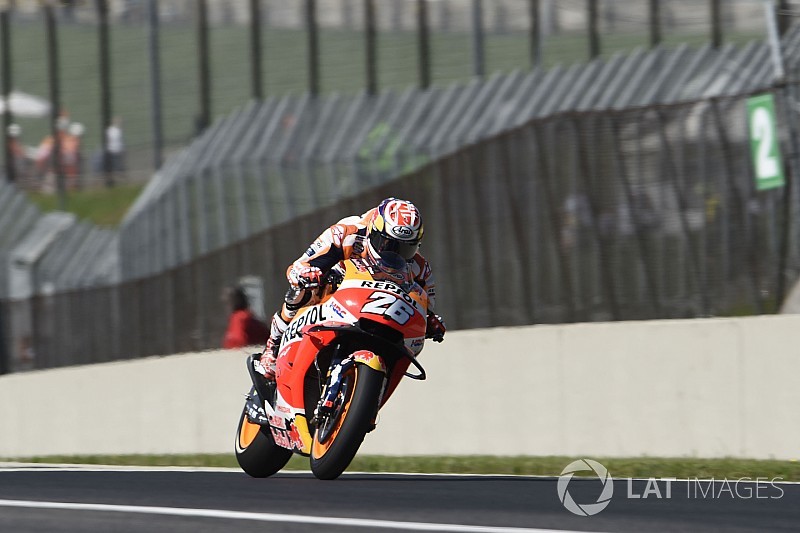 Dani Pedrosa has taken the blame for the crash that took him and fellow Honda rider Takaaki Nakagami out of contention on the opening lap of MotoGP's Italian Grand Prix.

Works Honda rider Pedrosa ended up in the gravel at Turn 2 at Mugello after running into the back of Alvaro Bautista's Nieto Ducati, collecting Nakagami's LCR machine in the process.

It followed Pedrosa's worst-ever MotoGP grid position, after he struggled to 20th place during qualifying amid a chronic lack of rear grip and stability issues along the main straight.

"Basically I touched Bautista’s rear wheel and then I lost the front, and my bike took Nakagami down," explained Pedrosa.

"I just braked normally, but for some reason Bautista was not releasing the brake early enough. I don’t remember exactly but I didn’t see he was in traffic so much.

"Anyway, my fault, of course. I barely missed out to not hit him, [it was] by a millimetre that I hit Alvaro’s wheel and my steering went."

Nakagami continued the race after pitting so his LCR team could inspect the damage, but was five laps down at the chequered flag.

"I’m very disappointed about the race after what happened at the start on Turn 2," said the Japanese rider.

"I understand that Dani lost control and hit into my rear tyre, it was a very unlucky crash.

"I took some time, but I restarted again. The bike was ok, the handlebars were a little bit broken but I tried my best just to finish the race. Ok, I finished in last position, but this is racing."

Pedrosa admitted the crash was an inevitable consequence of qualifying so far down, but said that changes made to his RC213V bike in warm-up had improved his feeling after a dismal Saturday.

"When you qualify 20th, you have 50 percent chance of finish on the ground - either by your own mistake, like today, or for someone else, like many other times," he admitted.

"I had to aim to recover today in the race because in the warm-up we did a good step with the set-up and recovered some good feelings. I was able to be quicker and constant and safer.

"Now we go to Barcelona, test [whether] this change also works there and gives me confidence."