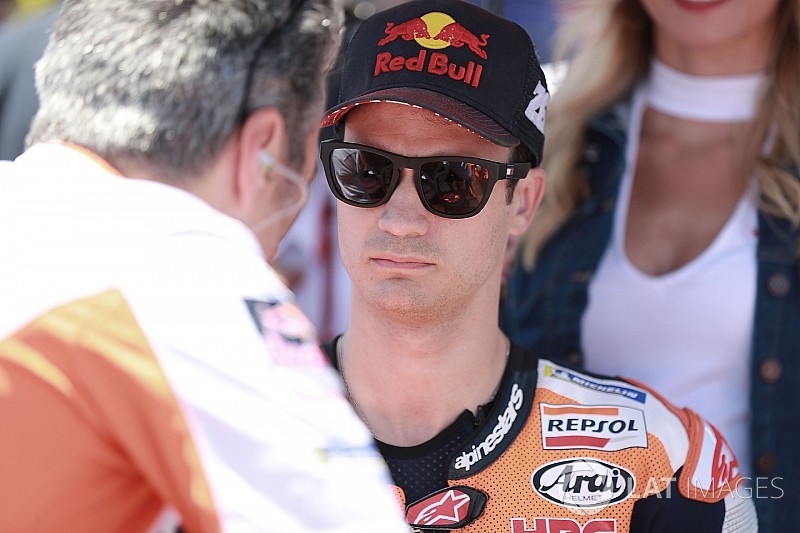 Honda rider Dani Pedrosa has called for “more respect” from MotoGP's race direction in the aftermath of his collision with Jorge Lorenzo in the Spanish Grand Prix.

Lorenzo had been forced wide by Ducati teammate Andrea Dovizioso at the Turn 6 right-hander and cut back to reclaim position, only to clash with Pedrosa, was trying to pass the two bikes on the inside.

The resulting incident eliminated all three riders from the race, with Pedrosa suffering a particularly nasty crash as he was thrown into the air from his bike.

The FIM stewards looked into the crash but announced shortly after the race concluded that they would be taking no further action.

Speaking to the media afterwards, Pedrosa aired his grievances with the stewards' decision-making, and argued he was not treated correctly when he came to race direction to discuss the matter.

“I went there, to speak with race direction, because I want to understand them,” he said.

“I want them to understand correctly what is happening on the track, because they don't.

“Most important is, sometimes they don't face things. I barely can walk, and I went there, and Mr. Mike Webb [race director] didn't even want to join the meeting, and he was next door.

“I deserve a little bit more respect than this.”

In the aftermath of Marc Marquez's clashes with Aleix Espargaro and Valentino Rossi in Argentina, the MotoGP stewards panel – comprising Webb and two FIM stewards – was instructed to impose tougher penalties for crashes.

Pedrosa, who broke his wrist in an airborne crash in Argentina when he was forced wide by Johann Zarco, was aggrieved by both the Zarco run-in and the Lorenzo clash being deemed “racing incidents”.

“It was a race incident for me in Argentina, it wasn't for Marc with Vale, but Zarco and me, yes... I highside because I pull up the bike, after Zarco's mistake I try to give space, and finally end up in the hospital.

“And this time, okay, Lorenzo maybe didn't see me, didn't look, didn't expect me there or whatever. But he didn't pick up the bike, boom, we end up crashing. And I highside again. And again racing incident.”

He stressed that he did not want to appeal the Lorenzo clash decision, however, as this would have pit him against the Ducati rider.

“What they said - 'okay, if you don't agree our decision', which I don't, 'make an appeal',” Pedrosa recalled.

“I'm not angry but I'm disappointed that they [the stewards] give the responsibility to the riders.

“Because I would appeal, then it looks like I go against Jorge. But, no, I am going against their decision. Which is different.”

Rossi: Yamaha could need "another season" to fix issues