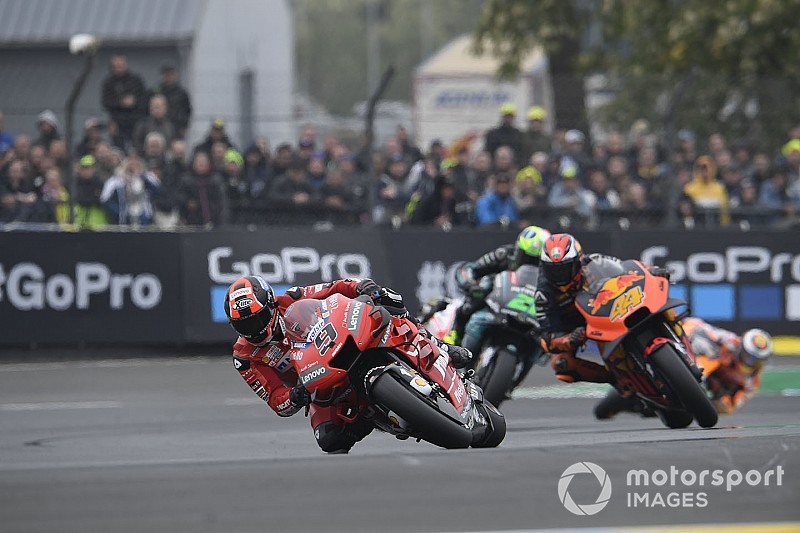 Pol Espargaro says MotoGP rival Danilo Petrucci has a “different view of racing”, after the Italian broke a winglet against Espargaro while making an overtake in the French Grand Prix.

Petrucci slipped behind KTM rider Espargaro early on in the Le Mans race, but soon barged his way back past at the sweeping La Musee left-hander, the overtake leaving his rival with “a hurt ass”.

“Danilo has a very peculiar way to overtake,” Espargaro said after the race. “He just doesn't care, he just goes into the corner, opens the throttle and hits you, and this is the way to put you out and then overtake you.

“I know that we are fighting to go into the top - also I was trying to overtake Vale [Rossi] because in the beginning I was a bit faster - but there are ways of overtaking.

“He destroyed one winglet with my body. I imagine how hard and big was the impact. He hit in my leg and ass with the winglet, and the impact, it was big because the winglet flew out. To destroy one winglet – you can touch it when the bike is stopped, the winglet is hard.

“Luckily nothing happened but we have different views of racing.”

“He did a very good race, for sure he wanted to overtake me because I was braking quite hard, it was the only way maybe to overtake me. But it was on the limit.”

Espargaro, who recorded a sixth-place finish in the end and described his final 5.9-second gap to race winner Marc Marquez as “unbelievable”, said it was a point of pride that a factory Ducati rider could only pass him through contact.

“It was simply amazing to see that we were catching Vale in some places and that Petrucci needed to hit me overtake me, they were on the limit to beat us and this makes me feel proud.”

Petrucci's aggressive racing style has irked rivals in the past, causing a rift with then-teammate Scott Redding in 2016 and coming under criticism from Pol's brother Aleix Espargaro last year.

The Ducati rider, who finished third at Le Mans, confirmed the winglet damage in the post-race press conference.

“Was not a big damage but my bike is always damaged after races,” he joked.

“Fortunately nothing big changed. I hope Pol wasn't affected nothing with that contact.”