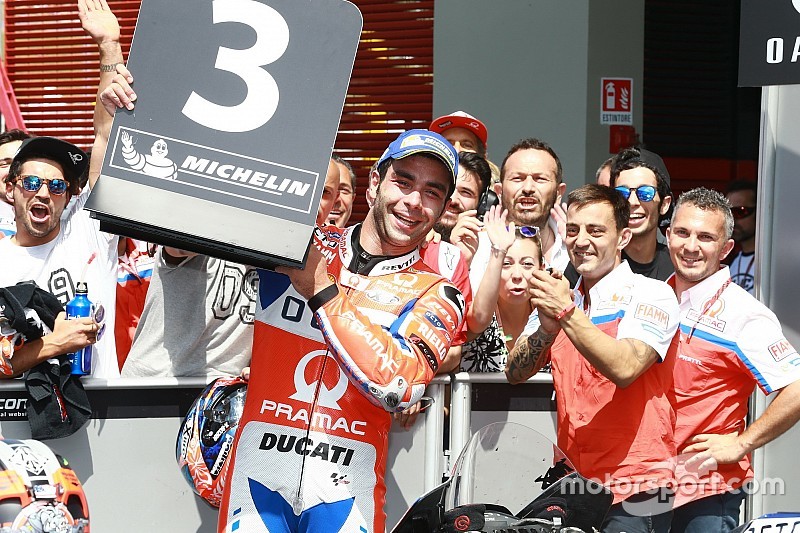 Pramac Ducati's Danilo Petrucci says he would’ve sold his house to finish on the podium in the Italian Grand Prix, his home MotoGP race.

Petrucci recovered from a pair of crashes in third practice to turn a lap good enough to be second on the grid in Mugello qualifying, only to lose that time for exceeding the track limits.

He moved from ninth on the grid to sixth on the first lap, then joined fellow Ducati man Andrea Dovizioso and Yamaha pair Maverick Vinales and Valentino Rossi in the lead pack.

Petrucci ran second to Dovizioso for five laps after passing both Yamahas, but was overtaken by Vinales and finished third.

“It's unbelievable. Saturday was quite strange because I crash the first lap out of the box and I said, ‘OK, a very good morning…’

"With the other bike, I started to push, push and I see my lap time always going down, and then I went down another time and I finished the bike [in a second crash].

"I did a very good lap [in Q2], but – I sincerely didn’t go over the kerb at Turn 5 - but I continued on the kerb and I passed through the green triangle at the end of the kerb.

“It's like a kerb but not painted, but I did a mistake and everybody said to me, 'OK, but tomorrow you can be fast.' I said, 'OK, but today was only one lap, tomorrow, 23 won't be so easy’.”

Petrucci’s access to a 2017 Ducati includes testing items during race weekends, but he ran the same specification at Mugello as at Le Mans a fortnight earlier.

After securing his second MotoGP podium, and first in a dry race, Petrucci joked he felt “someone will kill me” if he took local hero Rossi out.

“The previous races I started very, very badly but at the end I was quite fast during the race,” he said. “I knew I had to stay with the other guys in the front.

“When I was fourth behind Maverick, Dovi and Valentino I said, 'OK, you are fourth, wait until the last lap.'  But after a moment I said, 'OK, it's your home grand prix, try.'

“I tried with Valentino and I passed him, then after one lap I passed Maverick, but then I said, 'OK, you left with only one rider, try with Dovi.'

“It was not so easy, it was very, very close but to stay with him I finished my rear tyre. I said, 'OK, manage to stay up'.

“When Maverick passed me, I looked behind, [hoping] maybe Valentino was a little bit far but he was not. But at the end, I managed to stay on the podium and it was a great day for me."

Marquez couldn't do better than "bad" sixth at Mugello