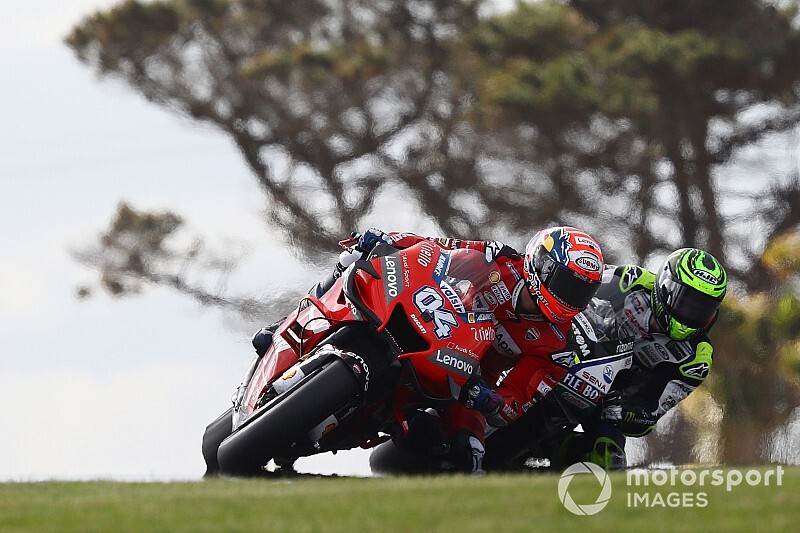 MotoGP Australian Grand Prix qualifying has been cancelled due to dangerous weather conditions at Phillip Island, with a decision on rescheduling the session still to be taken.

High winds have battered the Phillip Island circuit all through Saturday, with only 12 riders taking to the circuit in this morning’s FP3 session as a result – with it being red-flagged briefly due to Jack Miller’s pit board being blown onto the circuit.

This caused a small delay to the schedule, with the fourth free practice session getting underway at 2:45pm local time.

Around nine minutes into the session, a gust of wind on the main straight blew Tech3 KTM rider Miguel Oliveira onto the grass on the outside of the track on the run to the fast Doohan right-hander.

According to Tech3 team boss Herve Poncharal, Oliveira went down at 300km/h, and had to be taken to the medical centre for checks – though miraculously escaped injury.

The session was stopped with 12m53s remaining on the clock, with a emergency safety commission meeting called.

After a period of deliberation, it was decided to cancel the upcoming qualifying session due to the dangerous track conditions.

It is unclear yet if a qualifying segment will be run on Sunday prior to racing action, with conditions to be assessed on Sunday morning to see whether it is viable to run Q1 and Q2.

If not, grid order will be based on the combined practice results.

This would put Yamaha’s Maverick Vinales, who has topped all three sessions so far, on pole ahead of Ducati’s Andrea Dovizioso and LCR’s Cal Crutchlow.

Vinales took pole based on practice times in Qatar in 2017 the last time poor weather forced a qualifying session to be cancelled.

Update: Qualifying is now set to take place on Sunday morning after the warm-up sessions, with Q1 taking place at 10:20am local time and Q2 at 10:45am.

As a result, the race schedule has been pushed back by an hour. Moto3 will now get underway at 12:00pm, with Moto2 at 1:20pm and MotoGP now set for 3pm.

If qualifying cannot run for whatever reason, it is likely grid order for the MotoGP race will be based on the combined practice results from Friday and Saturday.