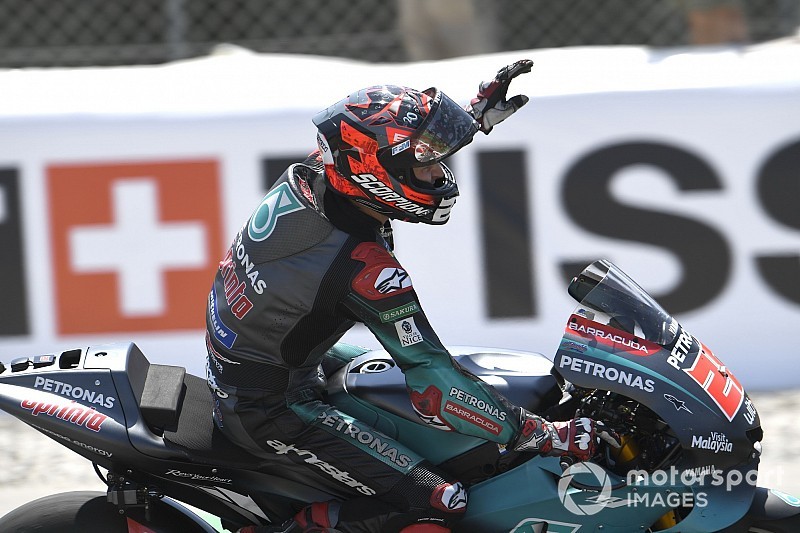 Honda rider Lorenzo fell at the end of practice at the fast Turn 7 left-hander, and required the attention of track personnel after walking away from the accident.

The three-time champion had a new aero fairing and also a new carbon reinforced chassis available, but ended the session down in 18th.

His teammate Marc Marquez was in a class of his own during the first couple of minutes of FP1 but Vinales took over the lead with a 1m34.477s at halfway point.

Vinales did not give up the lead until the final minute of the session, improving three times, but in the end he was demoted by Quartararo, who went 0.077s faster than him with a 1m33.909s.

Behind Vinales, Ducati's Danilo Petrucci was third-fastest as the Italian fought back from a fast crash at Turn 14 in the early stages of the session.

Marquez ended up sixth, just over six tenths off the pace, with LCR rider Cal Crutchlow bringing a third Honda into the top seven.

Andrea Iannone led Aprilia's efforts in 11th as his teammate Aleix Espargaro, who is aiming to race at Assen despite fracturing his femur and tibia in the Barcelona race, crashed.

He fell at Turn 5 and was visibly hurt afterwards, but carried on, recording 17 laps and ending up 14th.