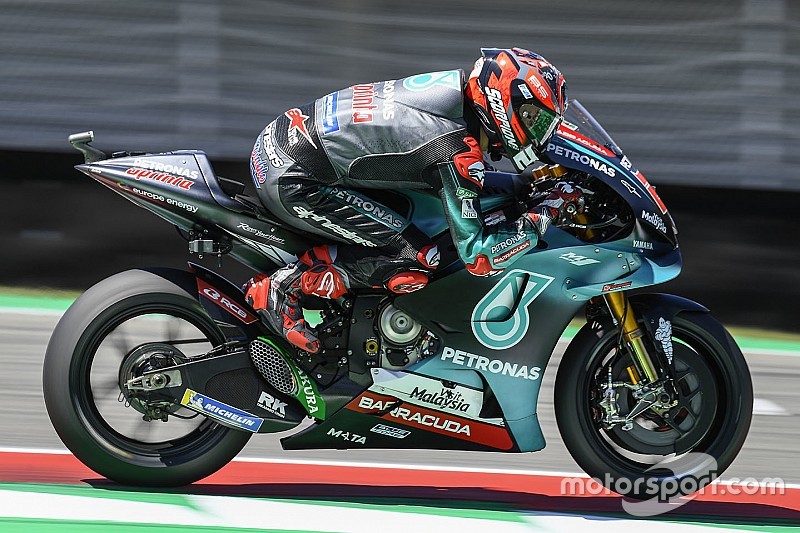 Fabio Quartararo led MotoGP's FP3 at the Dutch TT by 0.109s with a new lap record, while Yamaha stablemate Valentino Rossi missed out on an automatic Q2 spot after his best lap was cancelled.

Rossi lifted himself into Q2 contention with a 1m32.881s to go fifth at the end of FP3, but had that lap scrubbed for exceeding track limits at the last corner and was dropped to 14th as a result.

Teammate Maverick Vinales and Petronas Yamaha's Quartararo traded top spot on the individual FP3 timesheet in the early stages, with the works Yamaha rider prevailing to set the pace with a 1m33.260s.

For much of the session, only Aprilia's Aleix Espargaro, Tito Rabat on the Avintia Ducati and Tech3's Hafizh Syahrin had improved on the combined times.

LCR's Cal Crutchlow was the first significant mover, as he guided his Honda into a provisional Q2 place in seventh, while Quartararo cemented second with a 1m32.807s.

With just over nine minutes remaining, Danilo Petrucci shot to the top of the order with a record lap of 1m32.580s on his Ducati, which looked like it would remain unchallenged through as the chequered flag fell.

However, Quartararo began to light up the timing screens, and produced a 1m32.471s to usurp Petrucci.

The Ducati rider held onto second, with Marc Marquez third on the works Honda ahead of LCR counterpart Takaaki Nakagami.

Vinales was fifth in the session, but held onto third on the combined times by virtue of his 1m32.638s lap set in FP2.

Rossi will be joined in Q1 by Suzuki's Alex Rins, alongside the Aprilia duo of Andrea Iannone and Aleix Espargaro, and Pramac's Francesco Bagnaia.

KTM's Pol Espargaro had to go to hospital following Friday's sessions after experiencing pain in the hand he injured in a heavy crash during the Barcelona test two weeks ago.

He was cleared to continue, and will join the aforementioned in the first part of qualifying this afternoon.

Marquez: Lorenzo crashes show how difficult the Honda is