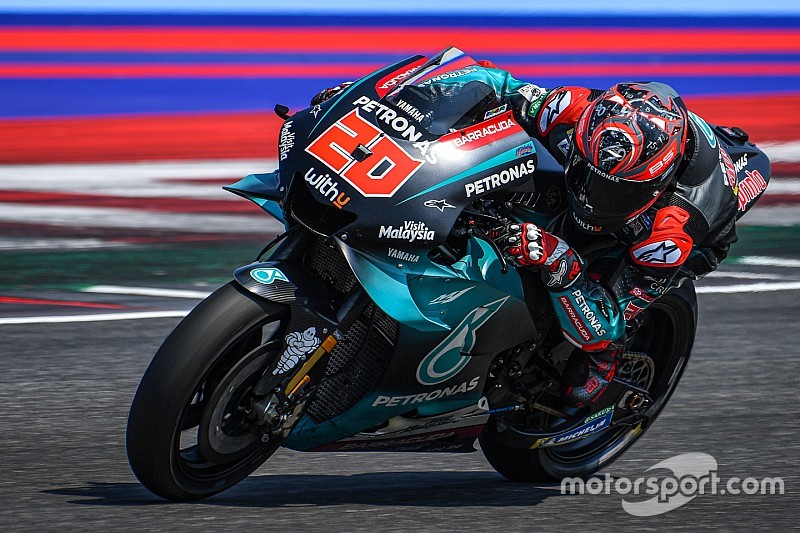 Fresh from suffering a mild concussion in a crash at the British Grand Prix, Fabio Quartararo topped the first day of MotoGP testing at Misano by 0.023 seconds.

Quartararo highsided exiting the first corner at the start of last Sunday’s Silverstone race, with Ducati’s Andrea Dovizioso launching over the top of the rookie’s stricken Petronas SRT Yamaha.

Despite both having to be taken to hospital afterwards, the two riders were at Misano for the first of two days of testing ahead of the San Marino Grand Prix in two weeks’ time.

Dovizioso had to pass a medical examination at the circuit on Thursday morning, but was declared fit and took to the track during the afternoon session.

Quartararo set the pace in the morning session as he worked on set-up ahead of the Misano race, and led the timesheets with a 1m33.539s lap.

He took over from world championship leader Marc Marquez, who crashed at the Carro Hairpin at Turn 14 early on while testing a new chassis.

Marquez’s 1m33.697s put him fifth in the morning session, and he set the pace early on when action resumed after the lunch break with a 1m33.471s, while the sister SRT bike of Franco Morbidelli fell in 0.190s behind.

With 90 minutes remaining Quartararo once again snatched top spot away from the Honda rider with a 1m32.996s lap, which stood as the benchmark through to the drop of the chequered flag.

Teammate Morbidelli ended up just 0.023s adrift in second after his 40th and final lap, while Marquez completed the top three – 0.203s further back.

Maverick Viñales was first of the works team Yamahas in fourth, as he and teammate Valentino Rossi evaluated the second version of the 2020 prototype M1 first introduced at the post-race Brno test.

Vinales was just 0.025s outside of Marquez’s best effort, with Rossi – who was just 0.024s behind Quartararo’s morning-session best - jumping up to fifth at the death with a 1m33.296s lap at the end of the session on the second prototype ’20 M1.

KTM’s Pol Espargaro was sixth ahead of stablemate Johann Zarco – who will not test tomorrow having focused exclusively on race set-up on Thursday.

Suzuki’s Joan Mir was an impressive eighth on his return to action following a fast crash at the Brno test which ruled him out of the Austrian and British GPs.

Takaaki Nakagami (LCR) and Pramac’s Jack Miller rounded out the top 10 from Aprilia’s Aleix Espargaro and Dovizioso, who was 0.858s off the pace, having managed a respectable 37 laps in the afternoon.

Silverstone race winner Alex Rins was 15th, having fallen in the morning at Turn 8, while LCR’s 19th-placed Cal Crutchlow suffered two crashes on Thursday – one at the same place as Marquez, and another in the afternoon at the tight right of Rio.

Tech 3’s Miguel Oliveira only managed two laps before withdrawing due to ongoing shoulder pain from his tangle with Zarco at Silverstone, with Honda’s Jorge Lorenzo also pulling out after the morning to continue recovering from the back injuries he suffered in June at Assen.