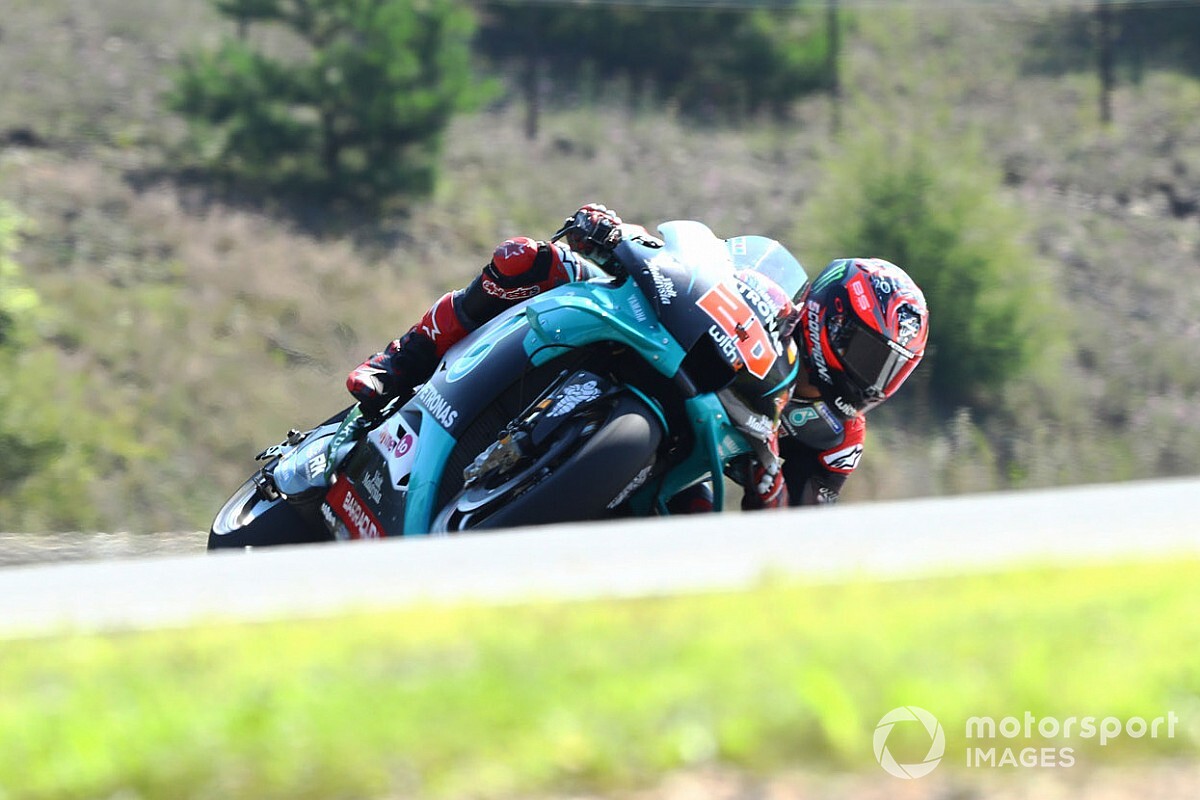 The Petronas SRT rider was fastest on the combined times on Friday after posting a 1m56.502s at the end of FP2.

Although Quartararo was visibly frustrated on the bike, with rear grip appearing to be the main issue, he said he doesn't believe he is "lost" in regards to finding a fix.

"It was a bit difficult because we know that in one lap we're fast, but to do the pace was much more difficult," the Frenchman said. "When I go back to the box, the first thing I said to the team of course after being a little bit more calm was, 'I am feeling really good with the bike'.

"The only problem is the tyre dropped too much, but that was the problem for everybody. It's just the consistency of the tyre was really bad. It's really important to feel good with the bike. We know where the problem is, so this is really positive because sometimes you are a bit lost."

Elaborating on his main issue, Quartararo says the Yamaha is suffering with the rear tyre spinning at a low-grip Brno. Though this has traditionally been an issue for Yamaha in the past, Quartararo was puzzled by it rearing its head on Friday as Michelin's new-for-2020 tyre has generally offered better drive grip.

"When we don't have much grip on the tarmac, it's a problem for us," Quartararo said. "We know that the Ducati, how they pick up the bike and with the power they do the lap time. For us it's much more difficult because actually we gain when we have the grip going into the corner speed, we have no spinning.

"And actually we have a lot of spinning, which I was a bit surprised by, because with the new Michelin tyres [traction] was much better. But, like I said, I want to keep working with the team to try to find a solution because it's a bit weird.

"We know the conditions will get better and better, because before coming here it rained a lot and then the track was not so good. We will work on it and we are already thinking about solutions with the team."

Factory Yamaha counterpart Maverick Vinales noted that the bumpy asphalt at Brno meant he couldn't remain banked for long during cornering, and believes tyre consistency will be key to being able to fight in the race.

"It's very difficult," Vinales said when asked if the condition of the track was stopping Yamaha from utilising its cornering strength. "You cannot stay banked for long because there is a lot of bumps, so you need to pick up the bike very fast. Anyway, I think for tomorrow we have good solutions.

"We need to work very hard on the electronics because the way the bike gives power is a little bit different to Jerez, because Jerez it was smoother track, superb grip. This is a totally different track and I think the consistency of the tyre will be the key if we want to battle in the race."