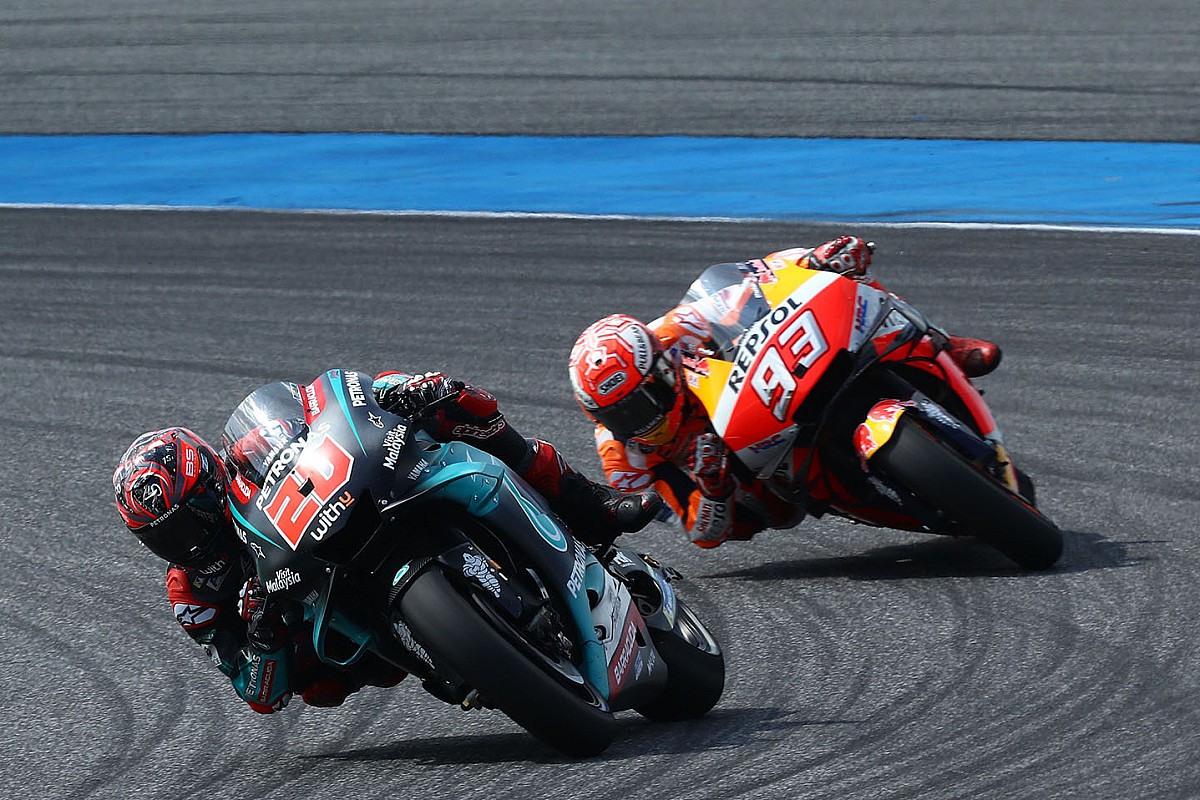 Fabio Quartararo says his last-corner MotoGP defeat to Marc Marquez in the Thailand Grand Prix was more "frustrating" than when he was beaten on the last lap at Misano.

The Petronas Yamaha SRT rider led off the line from second on the grid, and was only overtaken by eventual race winner and newly-crowned six-time premier class world champion Marc Marquez at Turn 3 on the last lap.

He tried to pass Marquez at the final corner, but ran wide and missed out on a maiden win by just under two tenths of a second.

Also losing out to Marquez at Misano on the last lap having led for most of that race, Quartararo admits losing again was “really frustrating”, but was still happy to be fighting with MotoGP’s “reference” rider.

“For sure this one,” he replied when asked if his Misano or Thailand defeat hurt more.

“In Misano, at the end, I didn’t try anything in the last corner. Here I tried something.

“I overtook him [Marquez], but I didn’t know really if he could enter and close [the line], and I saw his wheel and it was really frustrating [as it] was close to the chequered flag.

“So, really frustrating, but really happy to be fighting with Marc because we know this year – apart from Austin [when he crashed] – he’s always on the podium, and for many years he is the reference for MotoGP.”

At Misano, Marquez was able to study where Quartararo was strong while shadowing him, and did the same on Sunday in Thailand.

Quartararo admits he had no intention of altering this strategy to allow Marquez to lead for a while, and says if he didn’t try a last-corner lunge he would “not sleep until Japan”.

“I knew I wanted to try something in the last corner,” he added.

“If not, I will not sleep until [the] Japan [GP]. So, we tried it until the last corner, and step-by-step we are getting more experienced.

“The strategy was the same [as Misano], to lead the race and I felt good in front.”

This weekend Yamaha gave Quartararo’s engine the 500rpm it was docked at the start of the year to preserve mileage, having been upgraded to current-spec motors from the 2018 units he was supposed to race during the pre-season.

While the gains were not huge, he noticed the boost in power “a little bit” on Buriram’s straights.

“There was nobody in front [in the race], so it was really difficult to judge,” he said of the extra 500rpm.

“So it helps, and it’s a track that was already really good for Yamaha. But we didn’t expect to be this good because the top speed of the Honda improved a lot this year.

“I’m really happy about the result and finishing less than 0.2s to the victory.”