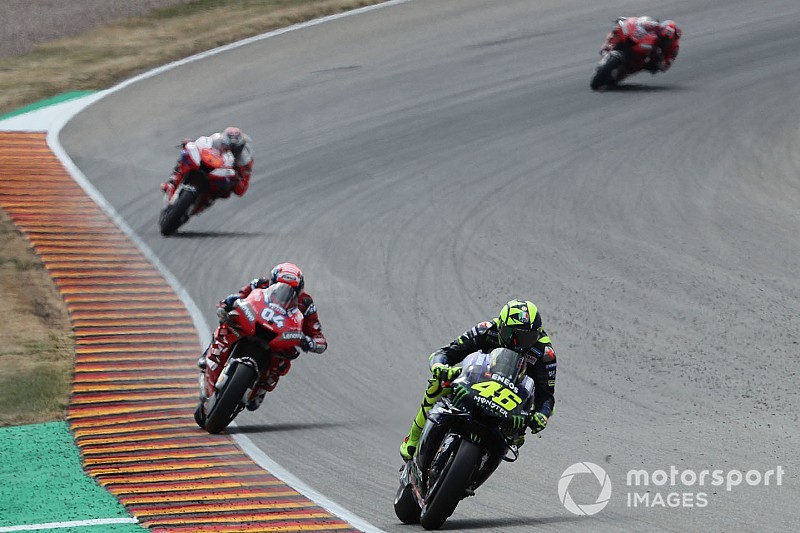 Five MotoGP riders including Valentino Rossi were called in by MotoGP race direction after an incident at the end of FP2, in which Maverick Vinales and Jack Miller were impeded.

Rossi, along with Danilo Petrucci, Franco Morbidelli and KTM duo Pol Espargaro and Johann Zarco, were summoned by race direction.

Miller and Vinales caught the aforementioned group at the end of FP2 in the twisty and tight Turn 1-2-3 part of the circuit, and both had their laps ruined.

Zarco called the FP2 incident a "big mess", but reckoned they were unlucky to have so many riders in the same place as there is nowhere to go at that part of the circuit.

"This last four minutes, we were unlucky to have so many riders at the same time in this same place," said Zarco, who ended Friday in 19th place.

"In MotoGP we are normally quite careful about this and we don't need to wait so much, or if we wait we can be out of the [racing] line.

"But in the race direction we explain that [we are] sorry for the guys that we disturb, but anyway we got like five riders in the same place, same moment, and get some of them angry.

"[It] was a big mess because between corner 2 and 3, is not so much space around. If you want to not be on the line, you'll be in the grass."

Petrucci elaborated further on the incident, while agreeing with Zarco that it is "impossible" to move aside between turns 1 and 3.

"Many riders like me, the two KTMs and Rossi, some of them were going out of the pit, other ones were just waiting for a tow," Petrucci said.

"In fact the problem is that in corner 1, 2, 3 it is impossible to give space to other riders coming.

"I saw Miller coming and I was going on the right side and Jack go through but then he found the two KTMs. Then there were already three riders in the middle and me and Maverick were coming. He found me in the middle of the line.

While nobody was given a penalty, Petrucci revealed that the last 15 minutes of Saturday morning's FP3 will be treated like qualifying, and penalties for impeding other riders will be given.

"We decide to have the last 15 minutes of FP3 with the same rules as Q1 and Q2. If you make some problem with other riders, we will be penalised.

"This is a rule we established in Assen for try to avoid this kind of thing.

"In MotoGP especially here, is very tight to the first four corners, [they] are all in the opposite direction so if you are wide in one corner you are on the inside a corner later so is very difficult to find space."

Quartararo admits he got "too angry" about practice hold-ups