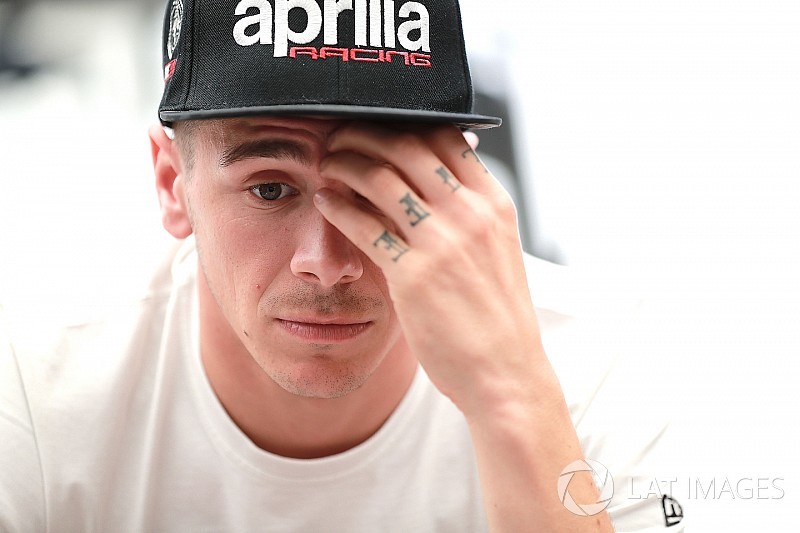 Scott Redding believes his “time is running out” to prove himself to Aprilia for next season, just four races into his MotoGP stint with the Italian marque.

Redding replaced Sam Lowes at the Gresini-run Aprilia outfit for 2018, after the team decided to terminate Lowes' two-year deal early.

But the new signing has only five points to show four his first four races with the Aprilia RS-GP bike, his start to 2018 blighted by a recurring lack of grip.

Redding's struggles were particularly pronounced in the recent Spanish Grand Prix, where he qualified dead last and could only recover to 15th in an attrition-heavy race.

“It is just [a matter of] time but my time is running out and I can't put the result on the paper,” Redding said. “I wish I could come in and say 'sorry guys, I was riding like an idiot, I was overriding, I wasn't doing what I should be'.

“So unfortunately I can't say it is me. It is something that is not helping me.

“I wouldn't say [I'm] under pressure, but I come in, I give 110 percent and honestly, at home, at the track, I've really dedicated myself - and if it is not enough, at least I can turn back to myself and say 'wow, you didn't do it half-hearted'.

“That is why it hurts me when I can't get the results because I'm really giving everything. There have been times where I've been like 'okay, it is what it is', but that ain't the case now.

“I want to make results and we're working but I ain't getting a benefit back. You got everybody signing [new deals], so everything is kind of going against me at the moment and I need to turn the current and go with it.”

Aprilia does not currently have any riders confirmed for next year – and has yet to extend the current agreement with Gresini over a MotoGP entry that runs out at the end of 2018.

Redding says that he “can't fault” the team's effort and that he's aware there's an expectation of results – with Aprilia currently last in both teams' and manufacturers' standings amid his struggles and the frequent technical problems for teammate Aleix Espargaro.

He added: “I know they are wanting results and something like [Jerez], I finish 15th because most of the field crashed, Aleix didn't make a result... they are going to be looking for someone next year.

“I know I am on that list but I need to show the performance and when the bike is not really helping me, it makes it hard.

“I will do the best I can until the last race of the season, even if they sign someone else, because that's the person I am. Until then I need to get the benefit of the doubt, for them to see that I am working to make it.”

Aprilia will test at Mugello on Thursday and Friday, and while Redding says there's a “big list of things” to try, he has only one goal.

“We just need to find something to get the rear to work, that is my only target going there," he said.

“The turning is not bad, the braking is not bad but when you first crack the throttle, I cannot make speed and exit the corner.”