Repsol Honda got its 2013 MotoGP campaign officially underway today, Thursday 24th January, at the Spanish oil company’s headquarters in Madrid where factory riders Dani Pedrosa and Marc Márquez spoke to the world’s media and the new RC213V machine was unveiled in its new livery for the upcoming season. The Repsol Honda team also took the opportunity to announce a new team structure for this year with Livio Suppo now taking on the role of Team Principal.

In 2013 we will again have a very strong team. HRC will give both our riders the best chance of victory.

The new livery for the official Honda factory team isn’t a millions miles away from the 2012 design only the iconic Honda wings image now adorns the seating unit while the main fairings are wrapped in the Repsol red. The crowded media centre was full of anticipation this morning with Shuhei Nakamoto, HRC Executive Vice-President present in Madrid to introduce the riders and explain a new team structure for the coming season. Before introducing the riders, Mr Nakamoto spoke about his thoughts on the upcoming season, his predictions for how new teammates Pedrosa and Márquez will perform on track and he also spoke about the new team structure.

Mr Nakamoto said, “In 2013 we will again have a very strong team - Dani comes into this season after a fantastic 2012 and with new motivation, Marc is a great talent and I'm sure it won't be long before we see him on the podium. I am excited about the new structure and everyone at HRC will continue to work hard in the bike's development to give both our riders the best chance of victory.”

Pedrosa was happy to be back at the start of another season with the Repsol Honda team saying, “I am very happy to have been here at Campus Repsol today, and to have been the one unveiling the bike and its new livery. We had run with the old design for a long time and I think that now is a good moment for a change. This year's bike has a fresh touch to it, which can give us a boost at the races. I hope the fans like it too. I'm starting this preseason really keen, as at the Valencia test after the last race of 2012 we had so much rain that we couldn't do much. I can't wait to get to Malaysia and have a few days to put the bike through its paces, enjoy myself and see which parts we are going to use for the opening race.” 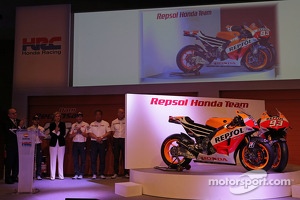 Márquez was surrounded with a flock of photographers and reporters eager to hear what the reigning Moto2 champion had to say about his new challenge. “I have really been looking forward to this moment,” said Márquez who continued, “I am very happy to have presented the new colour scheme for my move up from Moto2 to MotoGP. Seeing the bike painted with the Repsol and HRC logos makes you feel very satisfied with this new step forward —it makes you realize what a dream-come-true it is. I'm like a kid with new shoes!

I enjoyed the atmosphere of the presentation a lot, and I was able to see that the press attention for MotoGP is light years ahead of that for Moto2. We'll adapt to this, little-by-little. In the end, the important thing is what happens on the track, so I can't wait for the Malaysia tests to start. I think that it was a very positive initiative to broadcast the presentation online, because I'm sure lots of fans would have liked to have attended this event. I hope that they enjoyed it a lot,” Márquez added.

Mr Suppo also gave a short speech about his new position and about the season ahead. He said, “I'd like to thank HRC for their trust in me. I will do my best to merit my new role and hope to assist in the Team's success. I know that we can count on two very strong riders, a formidable machine, a great international crew and the great support of Repsol and all our sponsors. Together we will all do our best to keep the Repsol Honda Team at the top of MotoGP.”

Following the short Q&A with British reporter Matt Roberts, both Pedrosa and Márquez were joined by the new team officials with Team Principal Livio Suppo, Mr. Takeo Yokoyama as Team Technical Director and Mr. Hideki Iwano as Team Director. Former Technical Director, Mr. Shinichi Kokubu, will be the new HRC General Manager of the Technology Development Division. Pedrosa and Márquez will have their first outing of 2013 when the team arrives in Malaysia for the first test, scheduled for the 5-7 February.

Rossi and Lorenzo back side by side for 2013 MotoGP Championship