Several MotoGP riders, including Cal Crutchlow, were at a loss to explain their crashes during the San Marino Grand Prix.

Crutchlow, who struggled massively all weekend and crashed while running a lowly 12th, said he didn't do anything different compared to other laps.

"[I have] no idea [why I crashed] because I did nothing different to any other lap and I just crashed. It was exactly the same crash Marc had in FP4," he said of his Turn 8 crash.

"I was going as fast as I could without crashing and I ended up crashing.

"Just in the last moment in T7, but I did not feel that I was gonna crash at all. I was trying to ride to the finish in the fastest possible speed, which was very slow.

"I had no warning from the crash. I had more warnings on the right-hand side and I ended up crashing on the left-hand side. This is a problem."

Bagnaia reported he experienced issues he never had prior to the race nor in the pre-race Misano test, and had "very dangerous" moments in high-speed corners.

"When I start the race I was feeling something strange with the front tyre because I was losing the front in a lot of corners, most of all in the fast corner like T3 and T11 and it was very dangerous," said Bagnaia, who ended up crashing at Turn 4.

"I never lose the front in all the weekend and the test and in the race I lost a lot of time.

"Also the crash is difficult to understand from the data because it is nothing strange: the same brake, same speed, same line."

Nakagami meanwhile said he had moments in slower corners and was able to anticipate that he would eventually crash.

"I struggle a lot especially on the right side, on the left was okay," said the Japanese rider. "I didn't understand what happened.

"The problem is from the beginning of the race. I knew that if I keep pushing, maybe very soon I have a crash and at that moment, just lap three or four, the warning was at T4 and T10 and T14 which is the slow corners.

"I am really disappointed [about] what happened. We have to understand what happened during the race because this feeling I never had all the weekend. Very strange for me." 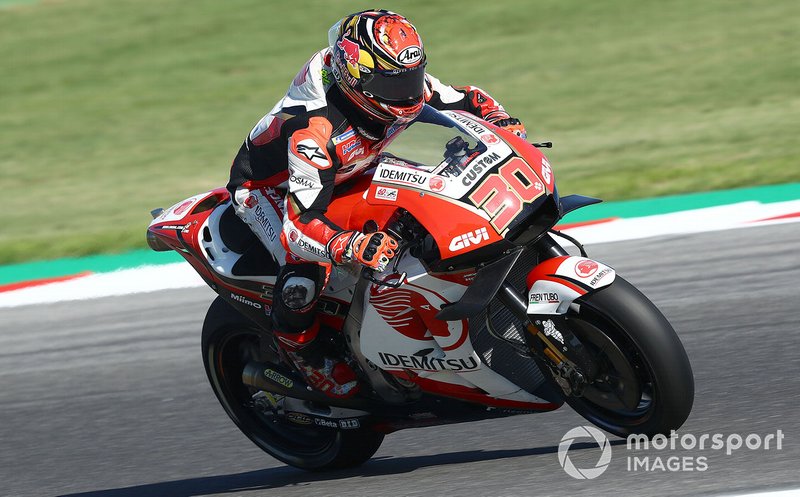