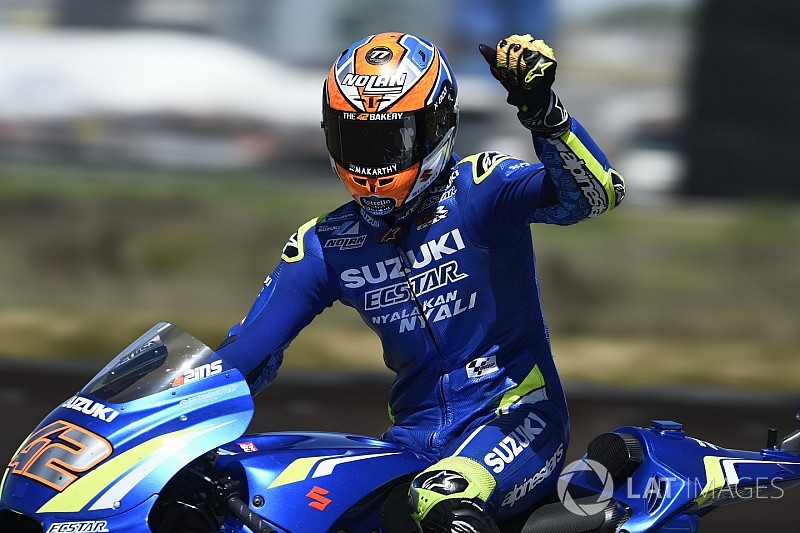 Rins has had an up-and-down 2018 season so far as he finished third in Argentina, but struggled for form in the following races, held at tracks which he missed last year due to injury.

It was Assen where he returned to racing last year, and Rins showed improved form at the Dutch venue as he was part of the front group throughout the whole race and ended up in second - 0.039 seconds ahead of Maverick Vinales.

Rins says by gaining experience in each race, he feels he will soon be celebrating his maiden MotoGP win, helped my recent engine and chassis improvements to the GSX-RR.

"Since Qatar, we are going very fast in all the tracks," said Rins. "I was able to ride with the front group in a lot of tracks, but I did small mistakes and I was crashing.

"I think all the races coming will be good for us, I will try to give my best in every race.

"We use the new engine and the carbon chassis. I feel very comfortable with those pieces, so you have to fight to get ahead.

"Little by little we are getting experience, but the bike works very well and I think that the victory will come soon."

Rins described his race as "the hardest of my life", but he enjoyed fighting with the top MotoGP riders.

"Incredible. I have no words," he said. "I think the hardest race of my life in MotoGP.

"I gave my best, we knew since yesterday it would be a very difficult race with a lot of riders in the front.

"But we managed very well. I was trying to keep my rhythm, trying to catch them because I knew I was able to finish on the podium."

Rins' most memorable moments from the race were passing Marc Marquez into the Strubben which nearly resulted in the Honda rider falling, and a last-lap overtake on Maverick Vinales for second.

The Suzuki rider added: "Was incredible, because two or three laps before I overtake Marc, I saw he was very strong on that corner, and I was feeling great, and I think why not?

"So I released the brakes and I overtake him, but on the next lap he overtook me. So I was saying 'wow, this will be a fantastic race'.

"Also in the end with Maverick, and with every rider, [Andrea] Dovizioso as well, I enjoyed it a lot."

Rins added that he wasn't 100 percent physically as he had a stomach bug in the morning of the race.

"This morning my stomach was not feeling well at all, and my breakfast was bad, so the doctors were able to treat me well, but I was a little weak," he said.

"It was a very difficult race. Thanks to Clinica Mobile, and all the doctors."