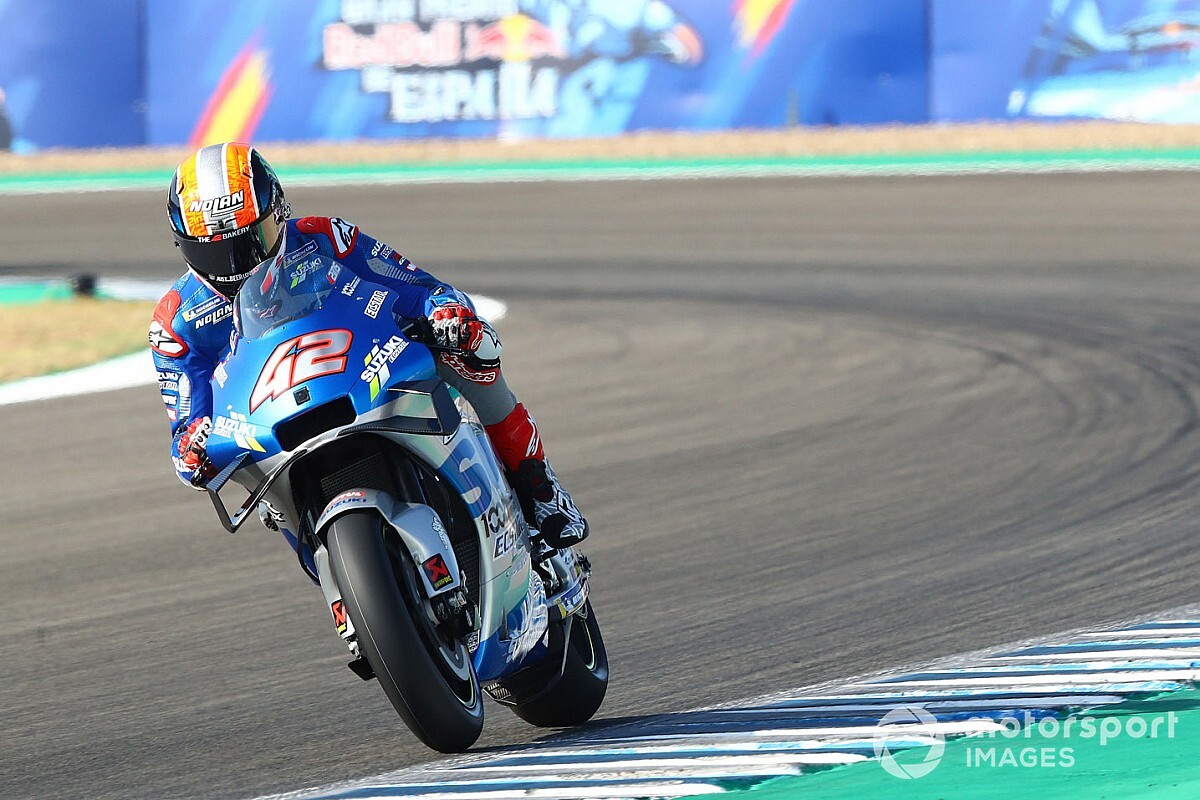 Suzuki’s Alex Rins admits Friday at the MotoGP Andalusian Grand Prix was a “painful day” for him, as he put miles on his recently dislocated and fractured right shoulder.

Rins crashed in qualifying for the Spanish GP at Jerez last week and had to miss the race owing to his injury, but was declared fit to ride on Thursday.

Completing just eight laps in FP1 without the use of painkillers, and admits he felt “much more pain” than he was expecting to after the session.

He managed 16 laps in FP2 and a best lap of 1m39.101s to end the day 21st and last on the combined timesheets having taken anesthetics in the afternoon.

“It was a hard day for me, painful day,” Rins said. “On the bike I was feeling a lot of pain.

"Before the start, I was thinking I will feel a bit of pain but I can ride well. But after the session, I saw this was impossible. I felt much more pain than I was expecting.

“Anyway, we need to keep fighting and working, FP2 was much better than FP1.

“In FP1 I didn’t use any anesthetic, but I used some in FP2 to see if we could reduce the pain. There was a bit less pain but not enough.”

Rins says he doesn’t have “enough power” in his shoulder at the moment, and will pull out the rest of the weekend if it still poses a risk to himself and the riders on track on Saturday.

“The positive thing is that after FP1 and FP2, the shoulder doesn’t look [like it has] a lot of inflammation,” he added.

“This means that I am not risking the tendons. Let’s see tomorrow.

“For sure I need to feel good on the bike and the moment I see I don’t have enough power, I will stop because it’s risky for me and for the other riders.”

LCR Honda’s Cal Crutchlow also returned to action on Friday at Jerez after fracturing his left wrist in a crash last Sunday in warm-up.

Completing 24 laps across the day in 20th on the combined timesheets, Crutchlow says he has shown “it’s possible to ride the bike”, but admits his feeling on it is “a little strange”.

“I think I showed it's possible to ride the bike this weekend,” Crutchlow said.

“My feeling on the bike is a little strange, I don't have so much pain in the wrist but when I do have some pain I just try and ride around as best as possible.

“I feel that the condition of me on the bike is not superb after the crash last week, but we'll continue to work over the weekend to make me feel comfortable and good for the rest of the race weekend.

“I think the surgeon, Dr [Xavier] Mir and the doctors have done a good job as well as me keeping ice on the wrist and doing the best to keep the inflammation down.

Reigning world champion Marc Marquez is set to ride on Saturday having been passed fit to ride on Thursday following surgery on his broken right arm on Tuesday.

Espargaro can fight for "something great" on KTM