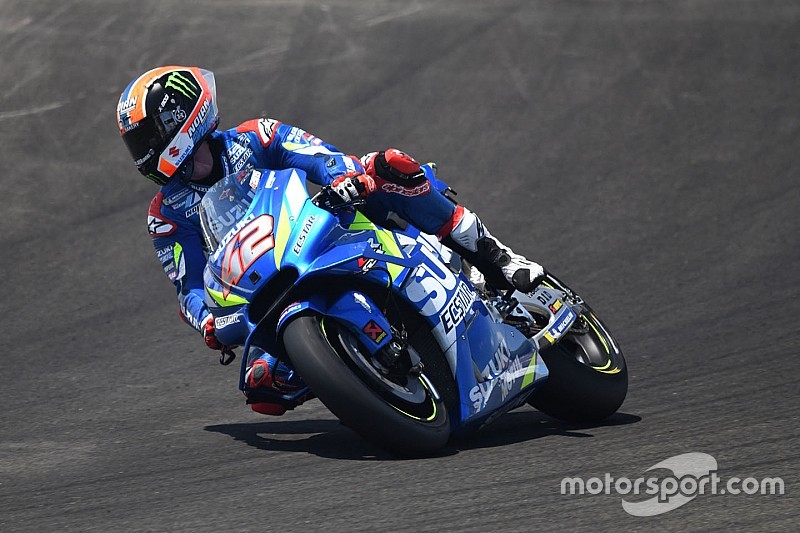 Alex Rins says he was amused by the footage of a marshal at Jerez taking a minor component from his Suzuki MotoGP bike at the end of the Spanish Grand Prix.

Rins finished second in the race and stopped on track to celebrate, which is when the onboard camera on his GSX-RR captured a track worker removing a small sweatband from the bike's brake master cylinder and stashing it away in his pocket.

The footage was uploaded to social media, and when asked if he had seen it, Rins laughed off the incident.

"I've seen [the footage], yes. It's incredible," said the Suzuki rider. "I don't have the word to define it [the component], it's the brake fluid tank cover on the handlebars.

"I'm sure it's already on Wallapop [Spanish website for selling second-hand items] and they're asking 1000 Euros for it.

It is understood that the offending marshal was identified by the circuit staff and that he was forced to return the item to Suzuki.

Rins' second-place finish was the result of a charge from ninth on the grid, but the Spaniard said he was "quite comfortable" as he knew he had similar pace to eventual winner Marc Marquez. However, he admitted that overtaking riders, especially the Ducati of Andrea Dovizioso, cost him too much time.

"We did an incredible race. Before the start of the race all the team and me knew that the rhythm was more or less the same as Marc, I was quite comfortable.

"The unique thing was, I needed to try to overtake fast and I lost a lot of time with Dovizioso. The Ducati bike brakes really hard and acceleration is quite nice.

"Anyway step by step I was overtaking the riders then I did a lot of laps in the front with Marc there, wait if he did some mistakes but anyway second position was incredible for us."

Quartararo 'can only be happy' with Jerez weekend