Rins puzzled by Suzuki's loss of form in Argentina

Alex Rins admits he and his Suzuki MotoGP team do not have a good explanation for their dramatic loss of form in qualifying for the Argentina Grand Prix.

Rins was one of the protagonists of the season-opening Qatar Grand Prix three weeks ago, only just missing out on a podium finish, while Joan Mir also finished a strong eighth on his MotoGP debut.

But both Suzuki riders had a difficult time on Saturday at Termas de Rio Hondo, as they failed to make the automatic Q2 cut in third practice before getting knocked out in Q1.

Rins will start Sunday's race in 16th, while Mir ended up slowest of the rookies in 19th.

Asked if he was disappointed by his Argentina pace, Rins replied: "Yeah, a little. The truth is that the qualifying didn't go well at all.

"In FP4 we felt strong, we felt that we could have a good pace, but in the moment of doing a [fast] lap we had a hard time.

"We have improved very little compared to yesterday, thousandths of a second, which we are not normally used to seeing. We have to do something to improve because in the end Mir is a bit like me.

"The team and I have given our 100 percent, so we have to see what happened, analyse calmly.

"The problem I see, which I may have missed, is to have traction at the rear of the bike, to have grip."

Rins admitted making a strong start from his sixth-row starting position will be vital to salvaging a strong result on race day.

"I think the objective is to make a good start and be alert to how the race progresses," he said. "It's going to be the key, whether it's dry or wet.

"Of course we have to be skilful and we have to be alert and not miss a chance to overtake and nothing else. After that, whatever comes." 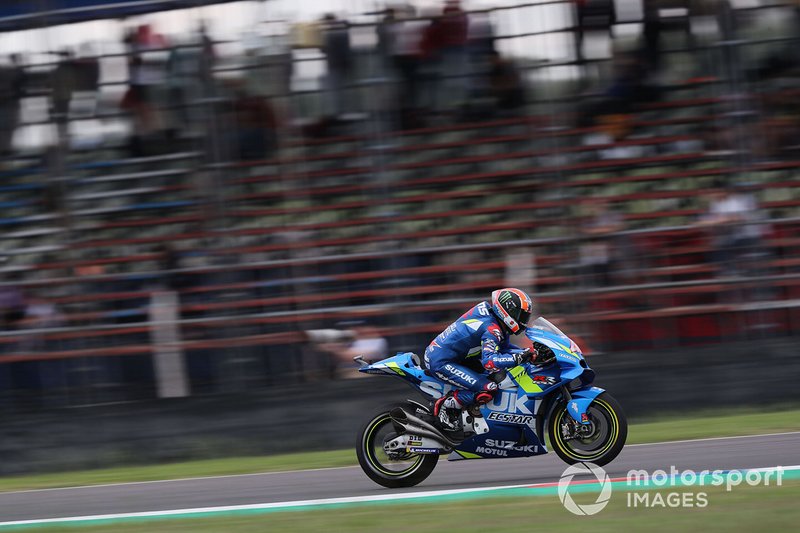