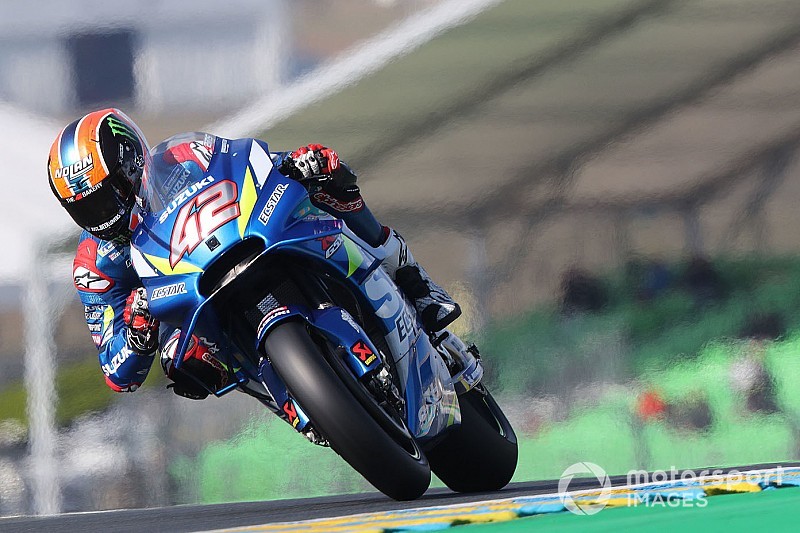 Alex Rins has called on his Suzuki team to address its struggles at Le Mans, after an underwhelming French Grand Prix showing put a dent in his emerging MotoGP title challenge.

A 10th-place finish in the Le Mans race mirrored Rins' result in the event from the previous year, but also snapped an 11-race streak of top-six finishes.

But while Rins had been hampered by qualifying 19th due to a “very bad strategy” in Q1 in mixed weather conditions, the Spaniard admitted he had expected stronger pace in the dry – and explained that he was struggling to make the most of the GSX-RR bike's traditional corner-speed advantage.

“I start the race very focused, with a lot of hope, but the problem was more or less the same than in practices,” Rins said.

“We were missing on the first part of the corner, the moment that we release brakes. In that area, if I try to do more corner speed, I was losing the front tyre. It's strange because last year we had the same problem.

"More or less the bikes are the same. For the next year for sure we need to try some changes on the bike. We need to resolve, because last year was the same.”

Asked whether he believed this to be a Le Mans-specific issue, Rins said: “I felt [the problem] more on this track than the other tracks.

“Maybe for the low temperature, maybe for the corners [layout], I don't know. But yes, in this track I felt more than the others.”

The French GP relegated Rins to third in the standings, 20 points behind championship leader Marc Marquez – yet Rins feels he was fortunate to pick up at least some points from Le Mans.

“We take six points from this race - the track conditions are not the best ones, was very easy to crash, as you can see, a lot of crashes Moto3, Moto2, MotoGP so I'm lucky to finish on the top 10.”

Rins added: “Anyway we need to work, we come here second in the championship, now it's third, I think it's not a problem, a lot of races [left].”

DTM wanted to pit Rossi against Dovizioso at Misano