Valentino Rossi fears that the MotoGP rider market for the 2021 season could move "too soon" for him to be able to make a fully-informed decision whether to retire or not.

The seven-time premier-class champion is under contract to Yamaha until the end of 2020, but previous rider market cycles indicate that deals for 2021 and beyond will most likely to be made in the early races of next season - and in some cases even before that.

Rossi therefore will have to reach a speedy decision regarding whether the 2020 campaign, which will be his 21st in 500cc/MotoGP, is to be his last.

The Italian has not ruled out staying on for 2021, but admits the timing of other deals is likely to force his hand and make up his mind sooner than he would like.

"For me it's a bit of a problem, because next year the market will move very soon, perhaps too soon," said Rossi. "It's really difficult to start thinking about 2021 at the start of 2020.

"The fact that we always [sign contracts] two years at a time isn't bad, the problem is that we should be able to have the chance to see how things go at least in the first six or seven races. It's very hard to understand who is strong in MotoGP or who is ready to make the step up from Moto2.

"But now it's like this also in other sports like Formula 1, where the level of professionalism is a couple of steps higher than us."

Rossi added that one factor that could convince him to prolong his relationship with Yamaha would be the chance to share a grid with half-brother Luca Marini in 2021.

Marini has established himself as a race winner in Moto2 with Rossi's VR46 team, and lies sixth in the current standings after back-to-back victories in Thailand and Japan.

"That would be very nice, because it would be a surprise," said Rossi of the possibility of racing against Marini in future.

"The important thing is that Luca continues to do well in the final part of this season and next season. Because if he continues like this, he can find a very good bike in MotoGP for 2021. If I am there also, it would be really cool."

This weekend's Phillip Island race will mark Rossi's 400th grand prix start across all classes, coming more than 23 years on from his 125cc debut in 1996.

The milestone comes amid a victory drought for the 40-year-old stretching all the way back to the 2017 Dutch TT, while he is also on course to finish the championship behind both Yamaha teammate Maverick Vinales and star Petronas rookie Fabio Quartararo.

"I've been racing a long time," said Rossi. "What makes the difference to me is results, when you are doing well, fighting for victory a podium, it doesn't matter at all.

"When you are in a tough period like this, everything is more difficult, but I still want to race for a while." 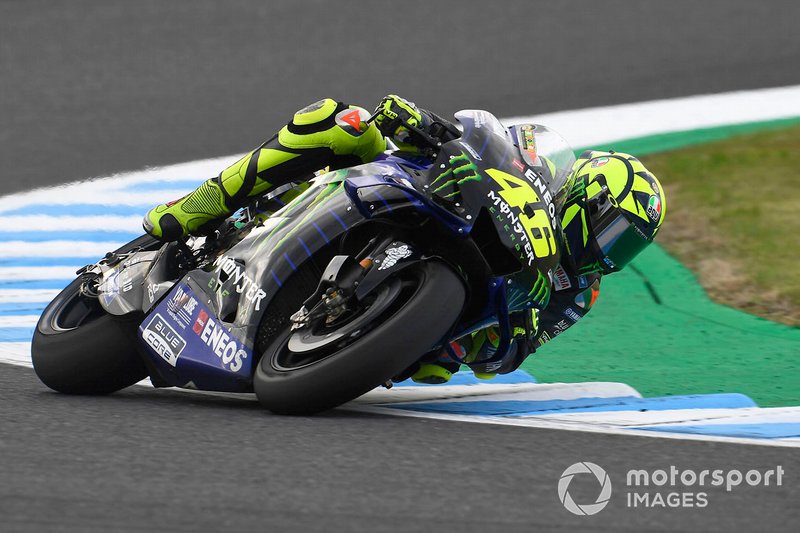