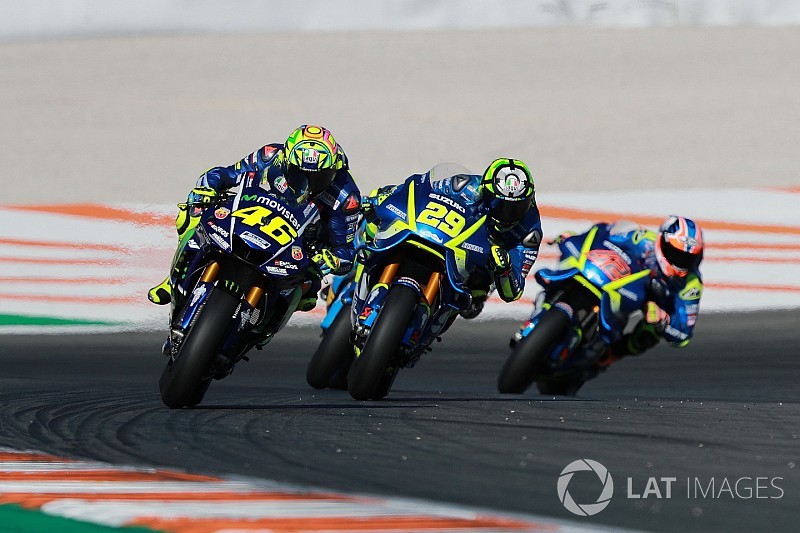 After a disappointing qualifying session, in which Rossi and Vinales placed seventh and 13th respectively, the works Yamaha squad made a last-minute decision to switch to the same specification of bike used by Tech 3 satellite rider Johann Zarco, who was second.

It marks the fourth different frame the two factory riders have used across the course of a frustrating 2017 season, statistically its worst for a decade.

Rossi finished fifth, dropping him to the same place in the riders' standings behind race winner Dani Pedrosa, while Vinales could no better than 12th.

A double DNF for Ducati meant Yamaha did at least get the consolation of securing runner-up in the manufacturers standings behind Honda.

The only set-up time both riders had prior to the race was in the 20 minute morning warm-up session, and Rossi said this meant the result would have been the same no matter which bike was used.

"Yesterday night we tried to change the chassis, we take the chassis from 2016 for understand the way," revealed Rossi.

"Sincerely, it's quite difficult to try to improve a lot in one day, and [it was] more or less the race I can do with the bike of yesterday.

"We did this choice because the problem is to try the bike [only] on Tuesday and Wednesday. So we say, why don't we try it today? Sometimes in a race you understand more than 10 days of testing.

"Unfortunately it's not [the thing] you put and everything becomes better. But I think we understand something interesting. This bike is easier to ride, you feel better in general."

Vinales' already-limited set-up time on the old bike was curtailed by an early crash in warm-up, although the Spaniard said he was "feeling great" in the two laps he managed prior to that.

"Even only for two laps, I feel better than all the weekend. Maybe I pushed too much and too early, because I was feeling good.

"Anyway, in the race we had some issues with the rear tyre. The feeling I had was that the tyre was not working well, a lot of vibration at the end of the race. I didn't want to risk more than necessary."

Zarco asked to "take it easy" by Marquez's mother