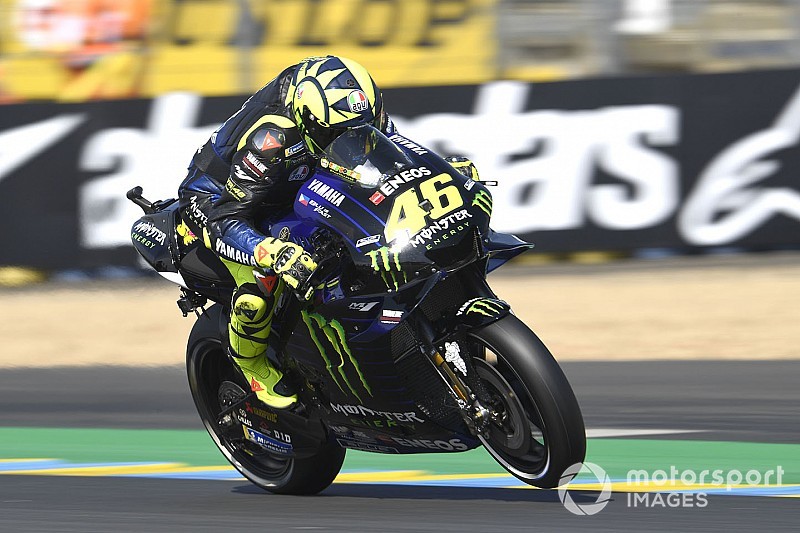 Le Mans has been a traditionally favourable circuit for both Rossi and Yamaha, but while the Italian's works teammate Maverick Vinales set the pace on Friday, Rossi currently doesn't have an automatic Q2 spot.

Rossi's end-of-FP2 performance was compromised by him still using a medium rear while the rest of the field was already doing fast laps, and he had time for just one flyer after a late switch to a soft tyre.

Rossi explained that the late change was down to him having to work on trying to improve the pace as long as possible.

"I expected to be stronger but at the end is a difficult day because already from this morning I had not a fantastic feeling, I suffer a little bit especially in acceleration," Rossi said.

"After this morning we have one problem with the chain, lose a bit of time, but in the afternoon we try something else.

"At the end I was able to do just one lap soft and I am out of top 10 so we need to hope that tomorrow morning can be dry for improve the laptime, but also work on the bike for improve the pace."

While acceleration has been a recurring weakness of the M1 bike, Rossi said he felt a disadvantage to the other works Yamaha in this area in Le Mans.

"I don't have a lot of grip in acceleration and I am not very strong. I lose a bit also compared to Maverick so I am not fantastic, we work on that way."

Vinales, who beat Marc Marquez by nearly two tenths in FP2, said that a breakthrough at Jerez combined with his riding style being more suited to Le Mans is what is allowing him to be on strong form this weekend.

"I think the step we made was in Jerez in FP4, and also in the test, small things, but finally over the weekend it help us," Vinales said.

"But I think this speed, for the feeling I have on the bike if nothing change, we can carry over to more tracks.

"I think it's important now to keep like FP1, FP2, good feeling. The feeling we have right now is that the bike is more stable.

"In Jerez I needed two or three tenths to be fighting for the top, I think here my riding style, the track suits a little bit more, we can reduce a little bit the gap."