Rossi: Fourth in the points now the "realistic" aim 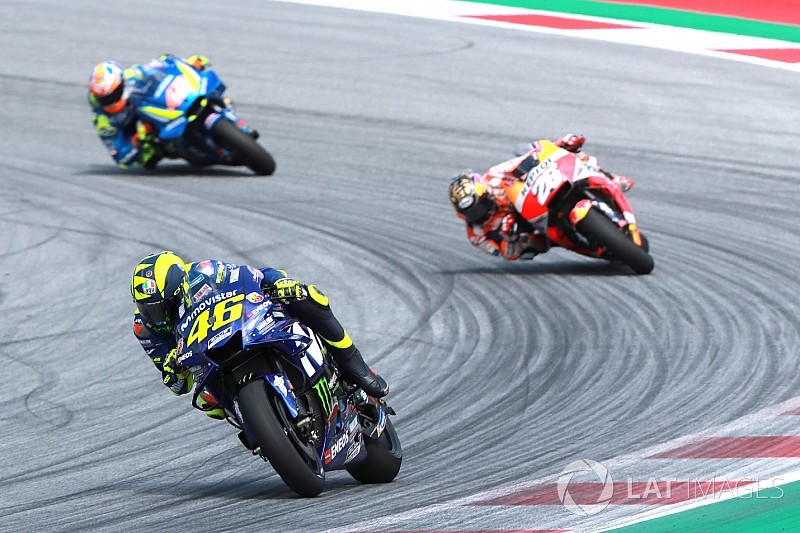 Sealing fourth place in the MotoGP standings is now the “realistic” aim for the rest of the season, says Yamaha rider Valentino Rossi.

Salvaging sixth at the Red Bull Ring from 14th on the grid, Rossi is now just 12 points clear of third-place Jorge Lorenzo, who won the race, with the Spaniard’s Ducati teammate Andrea Dovizioso a further point behind in fourth.

Although hopeful Yamaha’s woeful Austria form will not be repeated at Silverstone, Rossi conceded Lorenzo and Dovizioso are highly likely to surpass him in the championship given their superior form, which has produced back-to-back wins.

“Realistically, I think that the Ducatis will both beat me, because now they are close [in the points] and they are very fast,” said Rossi.

“It would be nice to fight for the podium on almost every track, but the three of them were faster this year, so it will be tough.

“But we have to try and I hope the next tracks, with more corners, we can be closer.

“Last year the Silverstone race was one of the nicest – I started on the first row and I was at the front. I led for 16 laps and at a certain point I thought I could win, but Dovizioso and [Maverick] Vinales beat me.

“We can be quick, but we need to see if Marquez and the Ducatis are faster than last year.”

Prior to the Silverstone race, Rossi will appear in a test with Yamaha at Misano on Sunday, before appearing in a further test at Aragon following the British GP weekend.

After not making any real progress in the post-race test at Brno earlier this month, Rossi said he is pessimistic of any significant gains in the upcoming tests.

“The important thing is to start trying something,” he said. “Misano is also important because it’s my home race. But I don’t think in these two tests we will make a big step.

“Last year at Misano I didn’t race because I was injured, so it would be nice to get a good result for all the people who will be there to see me.”

Pedrosa: Loss of form in 2018 is "unexplainable"