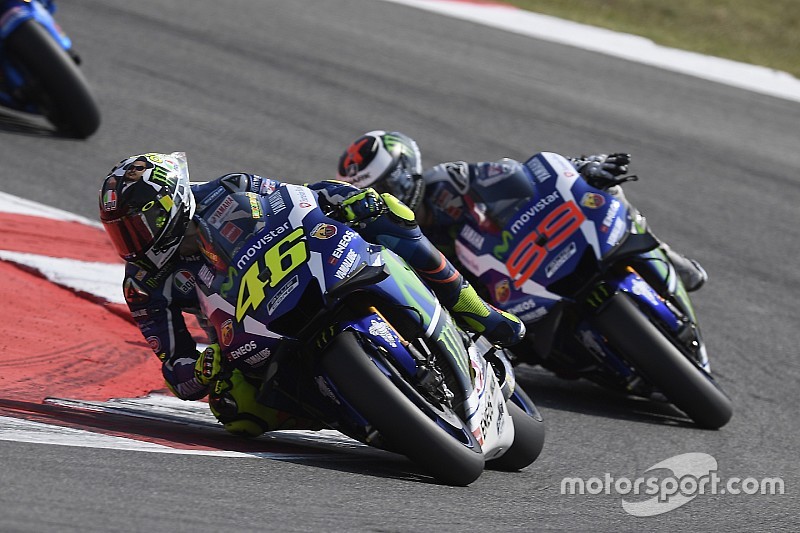 Valentino Rossi says he will not stand for Jorge Lorenzo's criticism of his riding, saying his move at Misano was "like any other overtaking move".

The overtake - a last-gasp lunge by Rossi to the apex of Turn 14 on the second lap - served as catalyst for a subsequent press conference row between the two Yamaha teammates.

Lorenzo's comments that Rossi was "too aggressive" and that other riders were "more clean" in overtaking triggered derisive laughter from the Italian's side and a subsequent verbal exchange - with Lorenzo saying after the conference that he was not impressed with Rossi's interruptions.

Rossi, however, insists he would not sit idly by and let his teammate criticise him.

"I think it was like any other overtaking more, like the one [Dani] Pedrosa did on me or all of those [Marc] Marquez did on me at Silverstone," Rossi said.

"I won't allow Lorenzo to say I'm a dirty rider when passing, because that's not true.

"He is also aggressive when he passes me. Everybody can draw their own conclusions."

Marquez says move "on the limit" but "normal"

Championship leader Marc Marquez, whose own rivalry with Rossi dominated the conclusion of the preceding campaign, said that it didn't look like the Italian had done anything wrong in his move on Lorenzo.

"I was already a bit far and I thought it was a little bit strange, because Valentino was leaning in on the corner from behind, but then I saw that he overtook," Marquez recalled.

"For me, okay, it's a normal overtake. [It] was aggressive, of course, but when you're in a home circuit, you always give more.

"Valentino is really smart, he knows that also Jorge has a good pace - and he overtakes aggressive, [on the] limit but okay."

Lowes to continue with Tech 3 at Aragon