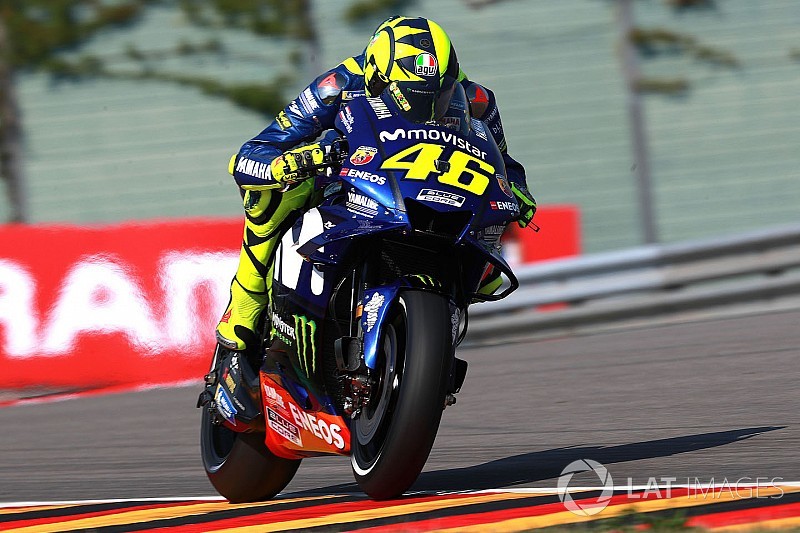 Yamaha’s Valentino Rossi says his struggles in MotoGP practice at the Sachsenring are related to rear tyre spinning and a lack of traction.

Rossi finished second practice down on Friday afternoon down in 17th place overall, 0.899s down on pacesetter Jorge Lorenzo and 11 places behind factory teammate Maverick Vinales, who was sixth.

While Rossi said his position on the timesheets was not reflective of his potential, he admitted that a lack of traction, related to Yamaha’s long-standing electronics woes, had cost him dearly.

“Different feelings during the day, first practice was not so bad,” said Rossi, who began the day with the third-best time in FP1.

“In the afternoon we tried to work with the used tyres to understand the pace, my rhythm was not fantastic, not strong enough.

“We tried to modify something to improve the acceleration but with the new tyre I was able to improve, but not enough. I am very [far] back in the positions.

“It’s not true the third position [in FP1], but it’s not true also the 17th place in the afternoon, I think we can do better.

“The problem is always the same, acceleration when we open the throttle, we spin too much, we can’t put enough power on the ground so we lose acceleration.

“At the same time, we lose too much the rear tyre, so it becomes difficult also to ride the bike. Tomorrow we’ll try to follow another way.”

Rossi has long since called on Yamaha to make a step forward with its electronics, and highlighted the fact that nothing had changed in almost one year.

“We have to be optimistic and hoping we can try something, because for me personally, and I said a lot of times to Yamaha, the problem is very clear.”

Vinales also conceded that Yamaha won’t be able to get back on terms with Honda and Ducati until it trials new electronics solutions in post-race testing at Brno next month.

“Still we have to wait for the summer [break],” said the Spanish rider. “Right now I think our bike has a good package, good base set-up, but the electronics limit us a lot.

“So, we need to work hard on that. I think the bike is really good, just we need to set up well.”