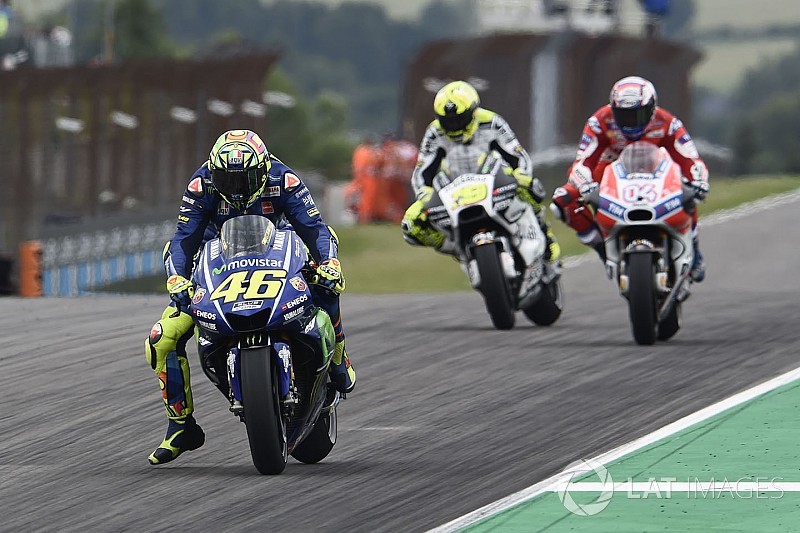 Valentino Rossi says he was relieved to finish in the top five of the German Grand Prix after enduring a challenging weekend at the Sachsenring.

The Yamaha rider admitted to being “in trouble” after Friday practice in both dry and wet conditions, and in a wet qualifying was 1.3 seconds off the pace of poleman Marc Marquez.

From ninth on the grid, Rossi made his way up to fourth by lap 10 of the race, and spent much of the remainder fighting teammate Maverick Vinales.

In the end, Rossi missed out on beating the Spaniard to fourth by seven tenths of a second, but said he was satisfied with the result given he had been so uncompetitive earlier in the weekend.

“Usually I’m not happy for fifth place, because I want to fight for the podium every week, but after the weekend, the result is not so bad,” said Rossi.

“The race was very tough from beginning to end, always pushing to the maximum and always with someone there behind. We were lucky because it was dry, because in the wet we struggled more.

“Fortunately it was not like Jerez and Barcelona, we could work better on the bike and with the new chassis we could be more competitive.”

Rossi added he felt he could have fought for the podium had he started further up the grid, but said it was important to bank important points on a track traditionally more favourable to Honda.

Despite falling to fourth in the points, he only lies 10 points behind Marquez heading into the summer break, with Vinales and Andrea Dovizioso five and six back respectively.

“I also started on the third row, and here it’s difficult to overtake,” Rossi said. “If I started more in front, I think I could still beat [Dani] Pedrosa and fight also for the podium.

“Sometimes you can push and have a great feeling, and some other tracks, you suffer more. So it’s important to try to take points.

“It’s a shame, because I want to try to fight Maverick, try to arrive in front, but today he was faster than me and he arrived in a better way.”