Rossi: Early MotoGP return "not for the championship"

Yamaha rider Valentino Rossi says his 2017 title hopes are not the motivation behind his earlier-than-expected return to MotoGP track action at Aragon.

Having successfully passed the on-track fitness test at the Spanish venue, the Italian will be back to riding the Yamaha YZR-M1 during Friday practice.

This will be 22 days on from Rossi breaking his right leg in a motocross training accident – and despite his minimal recovery time having been initially estimated as “30-40 days”.

Rossi, who has already missed the Misano race due to his injury, sits fourth in the standings, 42 points off the championship lead – with 150 up for grabs in the five remaining grands prix.

However, the 38-year-old insists his desire to win another MotoGP title has not played a major part in the decision on when to make his comeback.

“Is not for that, it's because I want to try to come back in a good shape as soon as possible and I think this is the best way.”

He added: “I want to be here, I suffer a lot to lose the Misano race.”

Despite Rossi playing down his title aspirations, team manager Lin Jarvis argued that the Italian could take inspiration from the way the Formula 1 title battle had turned at last weekend's Singapore Grand Prix.

Speaking about Rossi's comeback, Jarvis said: “I think you can look at his career and you can even ask: 'Why is he still riding?'

“He loves this sport, he is a racer. We still have five races to go where anything can happen, as we’ve seen in F1. Who would expect that? Now suddenly Lewis [Hamilton] has a huge jump on the Ferraris that should have been reversed and you never know what’s going to happen.

“There are obviously three riders ahead of Valentino in the championship, but you never know. Until it’s mathematically of physically impossible, he will still be there and he will still be pushing.” 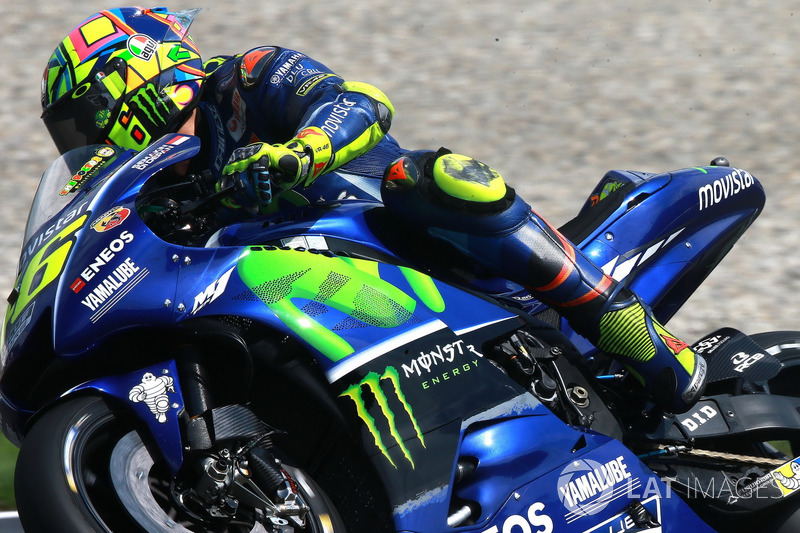 Rossi felt that riding at Aragon was crucial to his preparations for MotoGP's subsequent flyaway sequence, comprising races at Motegi, Phillip Island and Sepang.

“For sure in Aragon will be very very difficult to also finish the race, but is very important to not lose another one, also because after you have three weeks before Motegi," he said.

“It's also very important for the last part of the season, also for understand what we have to do more precise on the [injured] leg to come back on the top.”

He also said his recovery this time has gone smoother than in the aftermath of the right-leg fracture he had sustained back in 2010.

In that season, he finished a remarkable fourth on his return – but the Italian is reluctant to set any targets for the upcoming Aragon race.

“Last time was a big surprise, I lose the podium in the last lap with [Casey] Stoner, in the last corner maybe, but was a surprise also for me," he recalled.

“Now is a bit different. The level is very high but also the last one is usually 1.5s from pole position. And I don't know my level, need to understand tomorrow.

“Already [to] race, or finish the race, is a good target – and maybe take some point also. But is very early to say, better we speak tomorrow."