Marc Marquez says the spat between he and Valentino Rossi in MotoGP qualifying provided “extra motivation” to win the San Marino Grand Prix, even though it was not “necessary”.

Marquez and Rossi tripped each other up in a controversial moment at the end of Q2 on Saturday at Misano when both were pushing for a final laptime.

The Honda man said he was confused by Rossi’s “motivation” for holding him up, while the Yamaha rider said afterwards he felt Marquez knew he was deliberately ruining Rossi’s lap, although in the end neither were punished.

After making a last-lap move stick on the Petronas Yamaha of long-time race leader Fabio Quartararo at the Quercia left-hander, Marquez took a seventh win of the season.

With nearest title rival Andrea Dovizioso only finishing sixth and Alex Rins crashing out, Marquez admitted he did not need to push for the win – but the incident in qualifying gave him “that extra push” to win on Rossi’s home soil.

"I knew that it was not necessary to win, because I saw that Rins was out, Dovi was far,” Marquez said in parc ferme. “But honestly speaking, yesterday was the extra motivation, the extra push for the race.

"Somebody woke me up. It was the way to react, the best way to speak is on the track."

He added: "I tried to stay there [behind Quartararo], and then I say, ‘[Do] I try or not?’ But then I say I will try on the last lap. I will not sleep well [if I don’t attempt a pass].

"I knew that Fabio was really, really fast in [sector three]. So for that reason I tried to overtake him before T3, and in the T3 just I closed [down] the corners.

“I tried to be smart, and in the end [it’s] really nice to win here in Italy - but it's even nicer to have 93 points advantage in the championship.”

Marquez said his increased points buffer allowed him to adopt a different strategy compared to the previous race at Silverstone, where he was narrowly beaten by Rins.

"In Silverstone my strategy was different," he explained. "Today the [points] advantage was bigger, then you can change strategy. You can follow, you can play, and that’s what I did.

"In the end I just attacked on the last lap because I knew it was the best way."

Marquez's 93-point cushion in the standings means he only needs 58 points from the remaining six races of the season to put a sixth MotoGP title beyond doubt. 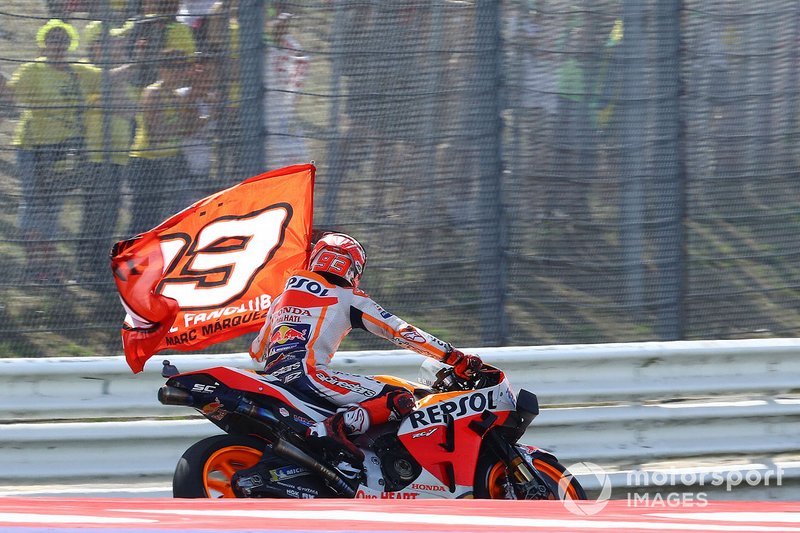