Rossi still "not fast enough" to fight for title 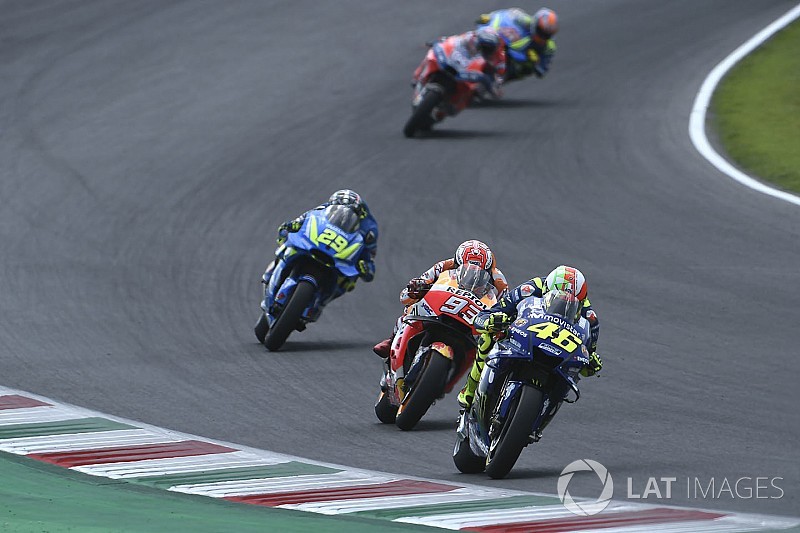 Valentino Rossi believes he is still "not fast enough" to fight for the MotoGP title this season despite registering his third podium of the campaign at Mugello and moving up to second in the standings.

From pole position, Rossi finished third behind factory Ducati pair Jorge Lorenzo and Andrea Dovizioso on his home track after coming out on top in a battle against Suzuki rider Andrea Iannone in the closing laps.

With points leader Marc Marquez crashing and finishing outside the points, it puts Rossi within 23 points of the Honda rider at the head of the table.

However, the Italian admitted post-race that the Yamaha's struggles over a full race distance in comparison with Honda and Ducati mean he doesn't yet have the speed to challenge for a tenth premier class crown.

"Not really, for me personally," said Rossi when asked if he felt he could be a factor in the title race. "Because to fight for championship, we have to go faster.

"If you check the ranking, 23 points are not a lot, for sure. And me and all my team and Yamaha will give the maximum. But at this moment I am not fast enough for the championship."

He added: "We improved mechanically the balance of the bike, with some different parts, and we can use the good thing of the Yamaha, but especially in qualifying or in the first laps when you have grip.

"Sincerely it’s a good weekend. I didn’t expect pole position, I hoped for the podium but I didn’t know if I could do.

"But for the race distance, especially for the second part when the tyre go down, or where there is less grip, we suffer more compare to Honda and Ducati.

"We have to work in different areas for improve these parts. For me personally the problems are very clear, and now Yamaha have to work and try to improve."

Rossi described the Mugello race as "one of the most difficult races I remember" owing to his difficulties with the hard front tyre, which he said he had to use to be able to go the distance.

"The bike was very difficult to ride with [the] low grip level in the front," he explained. "I had one moment where I was quite desperate because I was P5 and I think, ‘maybe it’s not possible [to be on the podium]’.

"But I had a small hope that [Alex] Rins, [Danilo] Petrucci and Iannone had the soft tyres and I could have a small advantage at the end, I tried to use at the maximum.

"Iannone didn’t give up and the last laps were every strong, but at the end I arrive on the podium, was my target, I’m happy."

Marquez: "Impossible" to beat Lorenzo even without crash