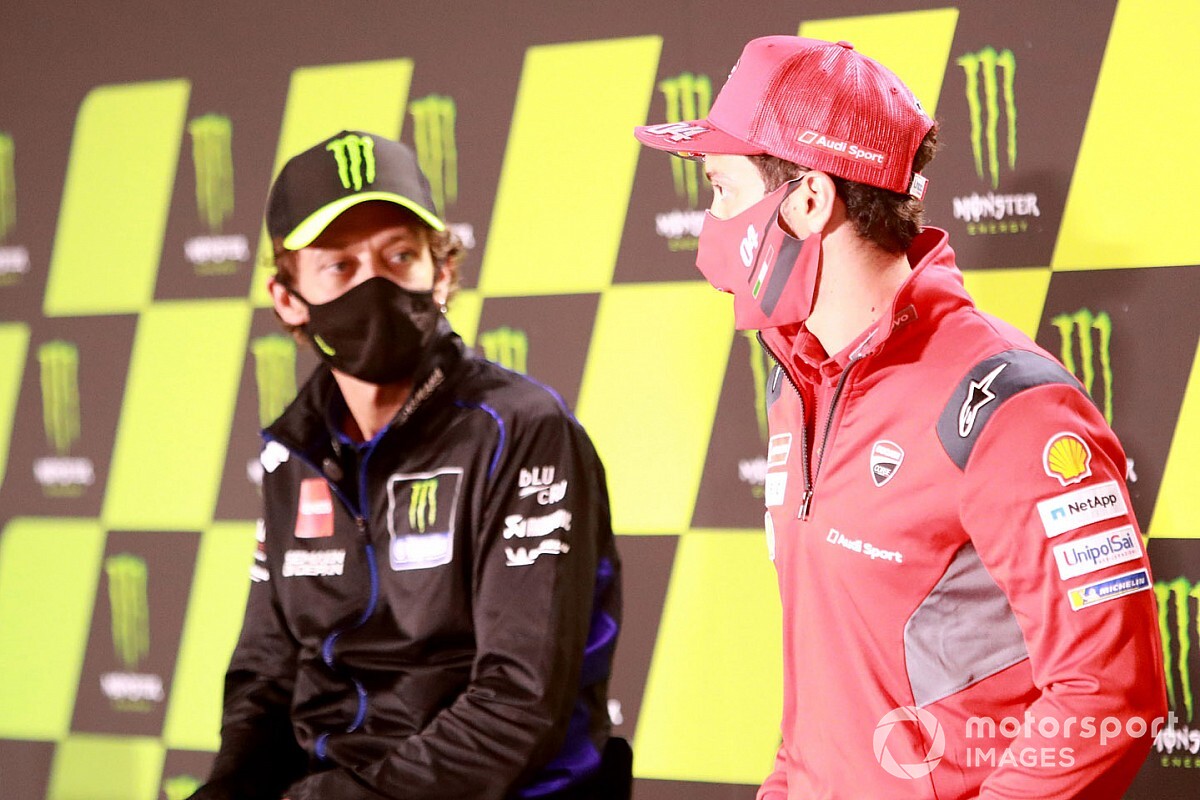 Yamaha MotoGP rider Valentino Rossi admits he is "surprised" by Andrea Dovizioso's decision to leave Ducati at the end of the 2020 season.

Dovizioso's manager Simone Battistella and Ducati announced on Saturday at the Austrian Grand Prix both parties would not continue their eight-year relationship beyond the current campaign.

Talks had stalled in recent weeks over the financial aspect of a new contract, though Battistella says no new proposal was ultimately tabled by Ducati.

Rossi – who raced for Ducati in 2011 and 2012 – says the new was a surprise to him because he expected Dovizioso and Ducati to work through their protracted negotiations.

"I'm surprised because I think they fight a little bit, but in the end [I expected] they [would] find the solution to continue," when asked by Motorsport.com what his thoughts on the Dovizioso news were.

"It's always difficult from the outside to speak about these things because you don't know the full story on the side of Dovi and the side of Ducati.

"So, this news surprised me. And this news opens the rider market because now one of the best places on the grid is open, that is the factory Ducati.

"I think a lot of riders want to go there, also our [VR46 Academy's] Francesco Bagnaia, who unfortunately had an injury at Brno in the worst moment in the championship because I think he can be very competitive.

"Also, it's very interesting to understand what happens with Dovi whether he continues to ride or not, because I don't know anything."

Dovizioso revealed he currently has no "plan b" for 2021, but wants to continue racing.

Pramac's Jack Miller – who would have been Dovizioso's teammate at the factory Ducati team next season had he stayed – called the Italian's decision to exit "devastating".

"[I'm] disappointed; he must have heard bad rumours about me," Miller joked on Saturday.

"I went and seen him before, I popped next door [to see him] and said 'surely it's not true', and he said 'yeah'.

"[It's] devastating news, but onwards and upwards, we'll make the most out him being a part teammate this year."

LCR's Cal Crutchlow, who was teammates with Dovizioso at Tech3 in 2012 and at Ducati in 2014, says the Italian marque will be losing "a great rider" – but doesn't believe he is irreplaceable.

"Well, they're going to lose a great rider," Crutchlow said when asked by Motorsport.com what Ducati will lose when Dovizioso walks.

"But that doesn't mean that rider can't be replaced. I think what he's done in Ducati over the years has been great.

"But if you remember his first year in Ducati, he was getting information not able to push and now look at the way he can push.

"Last year and this weekend especially, we know he's a great rider and they're losing a championship contender because he has been over the last three season.

"They're losing a good guy, but as I said that doesn't mean he can't be replaced and they can't find somebody just as fast or faster."