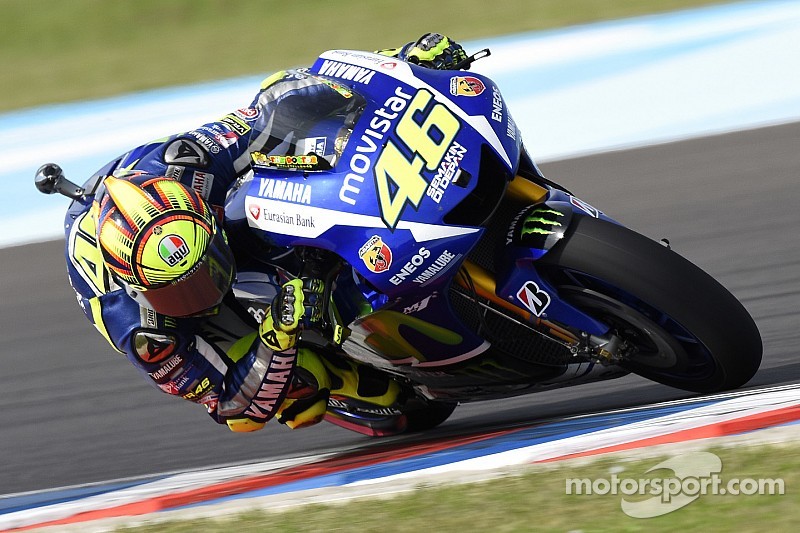 The legendary Valentino Rossi won a dramatic race to score his second victory of 2015 and stretch his championship advantage, as Marc Marquez crashed out during battle for the lead.

It's a great victory, we made the right decision

The 25-lap race got off to a frantic start as Suzuki's Aleix Espargaro grabbed the lead from Marquez, who assumed his familiar position at the front within a few corners and began to build on his lead.

Rossi's race was nearly ruined at the first corner, as he touched the rear of Ducati rider Andrea Iannone. He remained in his starting position of eighth for a couple of laps before he began his charge to the front.

The 36-year-old Italian took 10 laps to fight his way through into second place, and he then set after Marquez, who was four seconds ahead but losing grip with his hard rear Bridgestone.

Rossi's extra-hard option – brought especially for the abrasive Argentine circuit – gave him the advantage he needed.

While Rossi was reducing the gap to the leader, Dovizioso was able to stay with the Yamaha. Dovizioso's teammate Iannone was being hunted by LCR Honda rider Cal Crutchlow, as Rossi's teammate Jorge Lorenzo was marooned in sixth place for the majority of the race.

The gap to Marquez was progressively closed down, with Rossi's advantage clear to see on the timing screen, and with just three laps to go Rossi was ready to pounce.

When the decisive move came, Marquez tried his best to get back under Rossi but touched the rear wheel of the Yamaha and crashed out in a shower of sparks.

Rossi crossed the line for his second win of the year, with Dovizioso taking another podium finish for Ducati. The drama continued as a last-gasp pass by Crutchlow on Iannone gave the British rider a well-deserved third place finish on the satellite LCR Honda.

There was bad fortune for Pramac Ducati's Yonny Hernandez, who was forced to drop his bike after it caught fire.

Speaking afterwards Rossi said: "It's a great victory, we made the right decision and started with the extra hard tyre. When I saw Marc start with the red one I knew that he would try to push at the beginning. I made a great start but on the first corner Iannone pushed me on the outside.

"Step by step I came back, and when I arrived in second Marc had a little more than four seconds lead. I knew the race was long, so I knew he could have some difficulty. Catching him lap by lap, I could see him far away but coming closer and closer, it was a great taste!" Rossi said.

Reflecting on the incident with Marquez, Rossi added: "I overtook him in braking, but he is a rider who is all or nothing, he touched me in the corner, then he touched me again as I was accelerating, I think he made a mistake and he crashed.

"It's a shame because it could have been a great fight on the last lap. In three races we have demonstrated we can be competitive everywhere and fight for the championship.”

Why Vettel's Ferrari mission isn't over yet