Yamaha MotoGP rider Valentino Rossi says his difficult Thailand Grand Prix was “very similar” to prior recent races, which came as a disappointment after he’d showed promise in warm-up.

Adrift of the frontrunning Yamahas of works teammate Maverick Vinales and satellite rider Fabio Quartararo in Misano and Aragon, Rossi lamented a lack of rear grip on both occasions – and says he was hamstrung by the issue once more in Thailand.

The seven-time MotoGP champion had finished the Sunday morning warm-up in Buriram a promising fourth, but faded almost right away in the race, toiling to an eventual eighth-place finish.

“Unfortunately the race was very similar than the last races, because more or less I have the same problem,” Rossi explained. “So, after some laps, very early, I started to suffer with the rear grip, and looks like the tyre suffered more, and I lost grip and I lost performance, and I had to slow down.

“It was another difficult race. It’s a shame more because today this morning in the warm-up we found something good, we modified [the bike] a little bit and we found some grip.

“I was with the used tyre and after 19 laps [on it] I did some good laptimes, so I expected to do quite a good race.

“Unfortunately, with the same tyre [compound] but new, in the race we suffered. And, more or less is always the same, in the last races we have always that type of problem.”

Rossi said the problem was “very clear” on the bike, and revealed there had already been a “long meeting” to get to the bottom of the issue – with potential fixes coming in the next race at Motegi.

“We have something to do, and we will try in Motegi, because today sincerely, the first three are faster, but in the warm-up I was good, also with the used tyre, so I think that for example I can fight for the fourth place with [Andrea] Dovi[zioso], with [Alex] Rins, but unfortunately no.”

The other works Yamaha of Vinales shadowed leaders Quartararo and Marc Marquez for virtually the entire race, but the Spaniard was unable to recover from dropping ground in the battle in the opening half of the event and had to settle for finishing a second behind in third.

Vinales said he too was stymied by a rear grip problem, and has called on Yamaha to improve matters.

“Very happy, I’m pleased with the result, we are getting a lot of consistency – but now the team has to improve,” Vinales said.

“They [Yamaha] have to improve, now it’s time to do it. We are battling, we are trying to take out the maximum from the bike, we know how to do it – time to be in Japan, I think it’s a really good track for us and we’ll try to push even harder.” 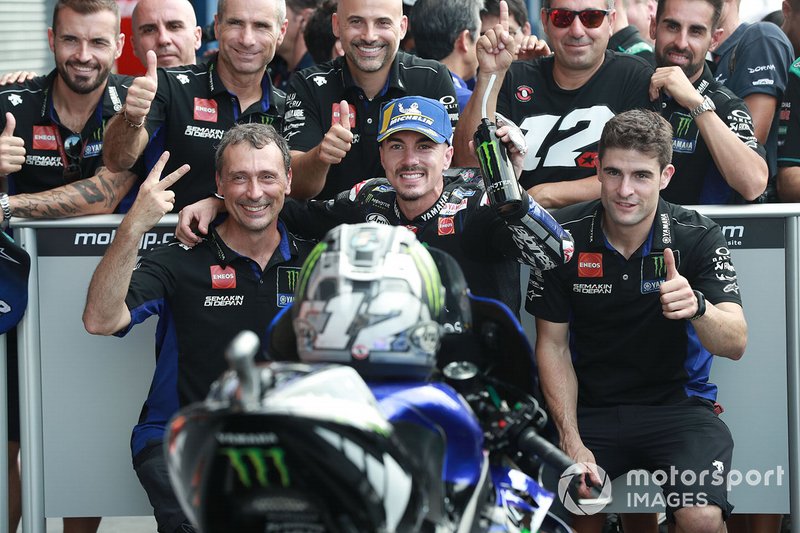 Miller "disappointed in myself" after kill switch error